An inspirational conversation, barre none 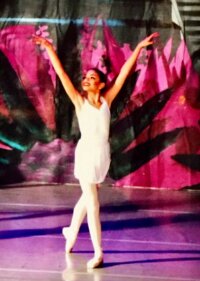 Isabella Silvi and the prima ballerina she interviewed are both of Filipino heritage.

By Isabella S. Silvi | For The Sun

I am a homeschooled eighth grader, and have been studying ballet at the Sonoma Conservatory of Dance for nine years. Recently I had a once-in-a-lifetime opportunity to interview a prima ballerina! In the midst of the global pandemic, something I had dreamed of became a reality.

I first took dance classes when I was three. Then, shortly before I turned six, I began taking ballet at the Sonoma Conservatory of Dance (SCD). I love dancing. Before the shelter-in-place health order, I would attend ballet and conditioning classes, plus rehearsals, at the SCD six days a week. My flexible schedule allowed me to be at the studio for up to three hours in the afternoon. We were also preparing for the debut performance of our spring ballet production, The Magic Grove. When the studio had to close, Patty O’Reilly, artistic and executive director of SCD, started conducting classes on Zoom. It was hard to stop dancing as consistently as I would have liked, and I missed seeing my SCD friends and Ms. Patty, who are like my second family.

Aside from Zoom classes, we began interviewing professional dancers, including alumni of SCD. Ms. Patty encouraged us to think beyond California, so I told my mom, “Wouldn’t it be exciting to interview Misty Copeland or Lisa Macuja-Elizalde?” She agreed, and helped me reach out to them. We discovered that we could send them a message on Instagram, so we did! Filipino prima ballerina Lisa Macuja-Elizalde responded immediately and said yes! We were thrilled to interview her and listen to her stories about her adventures as a dancer.

Macuja-Elizalde first talked about how she got into ballet. “When I was eight, my mom enrolled me in ballet. And at 14, I decided I wanted to make it a career.” She was mentored by Felicitas Layag-Radaic and was trained in the Royal Academy of Dance syllabus for 10 years. After graduating from high school, she earned a scholarship to the Vaganova Choreographic Institute in Leningrad (currently known as the Academy of Russian Ballet at Saint Petersburg).

“My parents wanted me to be an accountant,” she told me, “and allowed me to go to the U.S.S.R. thinking that I would be so miserable being away from home and living in a foreign country and not knowing the language, that I would decide to return to the Philippines and not want to pursue ballet as a profession.”

It proved to be the opposite. Yes, she was homesick, and longed for the tropical climate and home-cooked meals, but she loved the rigor and the discipline of her ballet training and her academic curriculum, which included studying Russian. She was also different from everyone else in so many ways! She was the oldest student, a foreigner, and everyone in her school had trained and studied together since they were young. But, she worked hard and was determined. “I believe that if you work hard and if you are passionate about what you do, you will achieve your goals and dreams,” she shared.

Macuja-Elizalde trained under former Kirov ballerina Tatiana Alexandrovna Udalenkova who taught her the Russian Vaganova technique, and she was coached by Natalia Dudinskaya who was like a second mom. “Not too long after I went to the U.S.S.R., my younger brother died in a car crash. I was devastated, and I could not even go home to attend the funeral.” Natalia Didinskaya was heartbroken for her young student and invited her to live with her instead of being alone, grieving, and far from home.

Once again, Macuja-Elizalde graduated at the top of her class in 1984. She was invited to join the world-renowned Kirov Ballet and became the first foreign soloist. Her favorite role was Kitri in Don Quixote. “I loved Kitri’s character because she reminded me of myself, full of life, that joie de vivre… I was so excited because my partner was a rising ballet star and I had a huge crush on him!”

In 1986, she returned to the Philippine Ballet Theater and performed around the world as a prima ballerina. In 1995, she started Ballet Manila, her own ballet company and school, with a vision of a company by the dancers, of the dancers, and for the dancers. She continues to be the CEO and artistic director of Ballet Manila, and has made it her mission to bring ballet to the people, finding talented children from marginalized communities and nurturing them to become professional dancers.

I was so touched by what she shared during the interview, and am filled with gratitude. Lisa Macuja-Elizalde was inspiring and it was a true honor and blessing to talk to her. I hope that by sharing this, our community will be inspired and blessed, too.