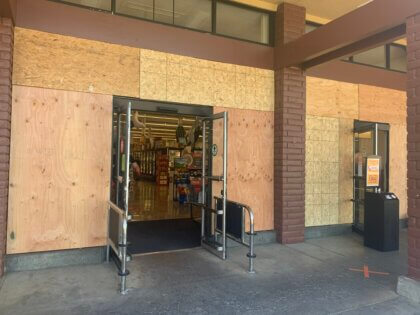 The protests roiling our nation have but lightly touched Sonoma Valley, but all of us here feel the tension and despair that’s broken out in city after city. Looting has occurred, and it’s been an unwelcome distraction from the airing of legitimate grievances about the ways black, brown and native people are treated by law enforcement in America. Our legacy of systemic racism risks unraveling the democracy we’ve spent over 200 years building.

Some stores in Sonoma have boarded up their windows and reduced their operating hours in anticipation, we suspect, of vandalism or looting. Both Safeway (above) and Pharmaca are now covered in plywood, and we believe such actions serve to undermine the protection they purportedly confer; boarded-up stores attract attention and send the wrong message about who we are and what we can expect. Corporations pay mighty insurance premiums to protect themselves from theft and damage; plywood is, frankly, a lousy form of insurance.

Despite the pandemic threatening the health of the nation, people are gathering in droves to express their frustration with the failure of fair and impartial policing, and calling for change. This is not the first time such protests and unrest have occurred, but something about what’s going on is different. America has become highly polarized and social media has accelerated a process of tribalization; people with shared affinities and beliefs are now connected with each other in ways never before possible. At the same time, rhetoric and expression has become more pointed and extreme.

The Trump White House has exacerbated our differences, and has added an unwelcome level of hyperbole to public discourse. The President himself, seemingly addicted to getting attention through tweeting to his followers, regularly excoriates his opponents and makes outrageous and unsupported claims. Though many miles from California, his actions prompt fear and worry in many members of our community, particularly Latinos.

Health, the economy, lost jobs and high rents have everybody on edge; what’s called for is calm and confident leadership, not foolish photo-ops or macho shows-of-force. People are scared, and that makes things dangerous. Now is not the time to throw gasoline on a smoldering fire.

We feel confident that any demonstrations in Sonoma will be peaceful and safe. Over the years, we’ve had many such demonstrations, and have proven that the people in this community care about each other and have no interest in creating havoc or chaos. If you decide to participate, please wear a mask, maintain social distance and keep cool. This is our home, after all, and its welfare depends upon all of us.