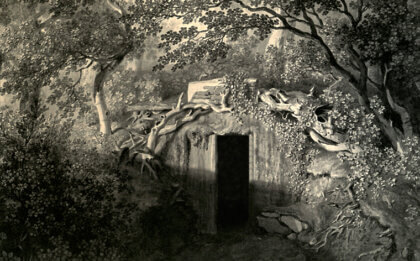 The story goes that very long ago, a hermit lived in sacred mountains, a Buddhist monk named Shih. Now, even hermits do not live entirely alone; they depend upon the generosity and support of a small community of others, and so it was that when Shih entered into a period of deep meditation, others looked in on him from time to time to make sure he was all right.

Word got around that Shih’s meditation was so deep that the others who came around never saw him doing anything at all but sitting still, his eyes just barely open. Still, the others looking in on him quietly swept Shih’s small cabin, shooed out the wild critters that found shelter inside, and repaired the roof when it leaked. Shih never spoke, never broke his meditation, and the others who came never spoke to him. This continued for a very long time.

In fact, Shih’s meditation lasted so long that caring for him became the task of generations. From parents to children and from those children to theirs, looking after the well-being of the long-sitting Shih lasted far longer than anyone who had actually known him prior to his deep meditation; Shih simply was and had been for so long that he became revered. Like ancient trees become sacred, so too did Shih become sacred to his community.

After one hundred years, in the late afternoon of a warm spring, Shih fully opened his eyes while his cabin was being swept by the great-great-great-great grandson of one of his first care-takers. Shih said nothing, but the middle-aged man hurried from the cabin–partly in fear, but also excitement–and told others in the community that Shih had ended his deep meditation. A delegation from the community assembled and a small group was selected to go to Shih’s cabin and be in his presence. The delegation expected that after meditating for one-hundred years, Shih’s first words would be important. They gathered offerings and other tokens of veneration and the next morning a small group quietly entered Shih’s cabin.

Still sitting, Shih smiled softly as the group entered. In the one hundred years he had been in deep meditation the world had changed greatly, and in some ways, so had Shih. Though as far as anyone knew he had not eaten anything nor had anything to drink, his body seemed fine and he’d not aged too much at all, except that is, for his hair and nails, which had been growing slowly for one hundred years and now snaked across the floor in long curls.

The delegation bowed and prostrated themselves, humble before their venerated hermit. Nobody spoke; after all, what does one say to such as Shih? After a while, the wind rustled outside of the old cabin, the door creaked, opened a crack, and sliver of sunlight cut across the floor and onto Shih’s lap. Shih smiled broadly, knowing the group was curious about what he had seen and learned during his deep meditation of one hundred years. He looked around, gazed deeply into the eyes of each member of the delegation and gently cleared his throat.

“Nothing happens,” he said softly, and with that his body disappeared in a sudden rainbow of shimmering light, leaving no trace that he had ever been there at all.