Posted on September 9, 2020 by Larry Barnett 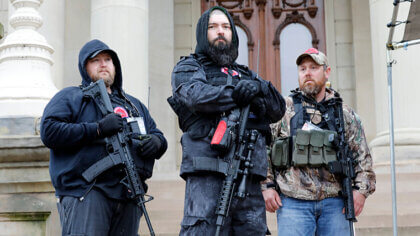 One of the toughest things about haters is hating them, finding yourself wrapped up in fear and anger you so dislike seeing in others. This, of course, is an experience haters never have; to be a hater requires setting aside introspection and appreciation of complexity. Hate is simple, it’s love that’s complicated.

Donald Trump is a hater, and he seems to have dragged most of the Republican Party into the gutter alongside him. To be fair, Trump was a hater before he was a Republican; while building his celebrity reputation, he understood the benefit of spreading his money around to politicians of all stripes. Notably, Trump’s Klu Klux father was a hater and Donald’s sons appear to be following in the family footsteps.

Psychologist Sue Grand explains the propagation of hate in her book The Reproduction of Evil, in which she explains how hatefulness and evil propagate within individuals, families, and societies. Grand believes it begins with trauma, and that unresolved trauma manifests in a repetitive loop-like fashion, replaying itself throughout an entire life by inflicting trauma upon others. In this way, violent abusers create new abusers within a tragic chain of trauma linking perpetrators and victims.

But Grand goes further, and explains the critical role of bystanders in the propagation of systemic hatred and evil, the mechanism through which society itself becomes a tool of trauma. She explains, “To arrest the cycle of evil, we must know history.” It is through the erasure of history that the bystander participates in the reproduction of evil, and this condition has never been more visibly evident than it is now. The embrace of hateful conspiracy theories, belief in the “deep state,” calling heavily-armed white vigilantes “great patriots,” denying systemic racism, and demonizing immigrants; all require the willful forgetting and rewriting of history. When media outlets like FOX and politicians like Trump spread lies and falsehoods, willing bystanders make them real, just as they did in Nazi Germany. Grand states, “Where history and memory are completely mutable and in the hands of one’s oppressor, one is emptied of will, autonomy, and humanity.”

Confronting evil challenges many of us precisely because we don’t want to become what we deplore. This prompts a question: how can we confront hate without becoming hateful? Martin Luther King’s solution was non-violent disobedience, the rejection of hate, and acceptance of the possibility of injury or death while confronting evil. This was also the tactic of Mahatma Gandhi, and it is an effective approach, albeit filled with personal sacrifice. Both King and Gandhi were deeply religious, and although religion can be wielded as a weapon, it also can provide a deep sense of inspiration, safety and protection. King famously stated that the long arc of history bends towards justice, yet the gains of history, Grand notes, can be lost, as the cruel and hateful death of George Floyd and so many other black men attests.

In general, acceptance of the wisdom of living an ethical life devoid of hatred in favor of compassion and love feels preferable to many of us, but it’s a challenging path filled with traps and complications. When trauma, fear, and humiliation produce hate it can become an enormously powerful force of evil. Love too is powerful, especially when placing care for others above oneself. At some level, perhaps, it’s love – its vulnerability, intimacy and exposure – that hate fears and hates most.