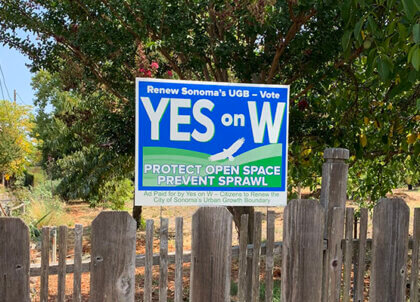 Before Sonoma’s Urban Growth Boundary (UGB) was established in 2000 with voter approval of about 65%, large tracts of agricultural land at the city’s southern border were being rapidly developed. The risk of sprawl was obvious; we’d all seen what had happened to the likes of Walnut Creek. The UGB effectively ended that type of land speculation, and placed expansion of Sonoma into the hands of Sonoma’s voters.

As a result, Sonoma’s small-scale character was preserved. From a business perspective, Sonoma’s “brand” was protected. For residents, the rate and scale of growth meant living here would continue to be relaxed, safe and rural. Expansion was allowed for affordable housing projects, and the language of the UGB renewal Measure W mandates that any land added to the UGB (up to 20 acres over 20 years) must be used for 100% affordable housing; of that, 51% must be for low and very low income residents. During the past 30 years, every fully funded, large affordable housing project application has been approved by the City, every single one.

Opponents of Measure W highlight the economic disparity between the Springs and the City, but the destiny of the Springs resides in its resident’s hands, not the City’s. If Springs’ residents want to go through the process and apply for annexation to the City of Sonoma, it’s their option. Rather than calling Sonoma residents racist, UGB renewal opponents should focus their energy on City Council regulations that govern zoning, the type and number of housing units allowed.

There is ample land for many hundreds of homes within its UGB; the city’s planning department confirms that fact. Further, both commercial and residential parcels can be re-zoned to accommodate more affordable homes. Local builder Steve Ledson replaced seven old homes with sixteen new ones on smaller lots. Commercial zoned property is allowed to have residences, as well. A second story of apartments can be added to strip centers; the Chevy dealership could develop housing on a portion of its large parking lot. The opportunities are many. The over-arching concern, however, is not if Sonoma will be unaffordable, but be uninhabitable.

We are facing a dire climate emergency. Locally, we must do our part to protect agricultural and open space for wildlife corridors, nesting sites, and riparian habitat from sprawling development. In addition, water availability, waste treatment, road infrastructure and fire protection are serious concerns. Groundwater levels are dropping, and its quality is declining. City-centered growth where services, infrastructure and transportation are available is the wisest economic path.

Unless we carefully control growth, we’ll outstrip our abilities to provide for the future. It’s why the UGB was created in the first place, and why its renewal is necessary. If you like living in a small town as much as I do, then be thankful for our Urban Growth Boundary. Yes on W.