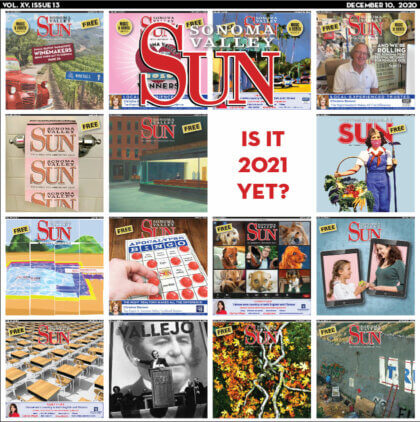 When I mention to people that I graduated high school in 1959 I get that are-you-from-another-world? look, I think, yeah, I am.

Reader opinion by Will Shonbrun

It was a time before JFK, Vietnam, the Beatles or the Stones, or color TV. It was before MLK Jr.’s “Dream” and Malcolm X’s warnings and the only king America embraced was Elvis. It was a time of “innocence” and it masked the ugly truths just below the surface. In a sense, it was another world.

In ’59, America-world was Pleasantville before it turned to color. The only black people on TV were entertainers, boxers, and other sports figures, or occasional film clips of famous or notorious Black dudes and dudettes from other countries. American apartheid was so entrenched and accepted as to appear almost normal.

Our culture, our social existence, was portrayed as one big happy family with a smattering of malcontents and pesky dissidents. The actual American history of Native genocide and slavery had been effectively eliminated from American consciousness and in our schools. Riots in the streets of New York, LA, and elsewhere exploded our mythical portrait, and the Civil Rights Movement brought reality to bear and exposed the lies and injustices. We’d lived in an airless bubble of illusion until the thing broke under its own weight and expansion.

America started to get real. The 1960s shattered the illusions with the gunfire of assassinations and the bombs and napalm of a war that would tear the country apart. Human and civil rights movements for Blacks, women, students, the poverty-stricken, and the sexually different broke the spell America had been under for centuries, and there was no turning back. To be sure there was a resounding backlash as there is to this day.

Then along came the predecessors of Trump and Trumpism and a resulting neo-fascist slide into nationalism, fear, and hatred of “the other,” questioning of science and the stark realities of facts and proven truths, and an insane faith in a savior that would make things “right.” It was a tale told throughout human history and it was America’s turn to embrace an unhinged, hate-filled, damaged and empty being who could only feed on destruction. It served to bring out all that was rotten and putrid in our society but had been there all along.

So what’s the vision for the future? Where will politics take us? How deeply will we delve into our prevailing systems – political, economical, societal, educational, healthcare and yes, psychological – in order to truly understand what makes us tick and what motivates us to change and ride an arc toward a progressive bend? What are the rights of humankind to seek and espouse so that our species will not destroy the natural word and its myriad forms of life?

So, okay, America’s House landed on him and ding-dong the witch is dead, but does that make everything alright in Oz? We know the answer to this fantasy. Our problems are existential and of a magnitude not seen before on Earth. Thanks to Trump and his Republican abettors in Congress and elsewhere our divides here in this country are greater and wider than ever before. Our globe and its societies are interconnected in every fundamental way and if we humans cannot act in consort within our individual nations, how then can we hope to sustain our world?

The existential matters that existed before – human-made climate change, nuclear-armed and proliferating nations, and the human dilemmas of exploitation, greed and racism – are very much with us and greater than before. We are at an abyss and pretending otherwise will prove fatal.