The sad beauty of inevitable decline 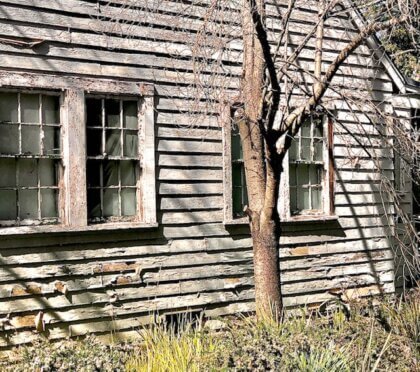 The Sonoma Developmental Center is slowly and beautifully being overgrown and overtaken by nature.  We have been hiking in SDC a least once a week now for several years. The buildings are in a state of decay, as vines and tree roots reclaim them. The buildings of the main campus are dissolving ever so slowly at their edges. From a distance, they seem as if they are substantial, indestructible. Close, you see the cracks, the little tendrils working their way to the surface, breaking these buildings apart.  Moss and lichen are covering and reclaiming what we have made.

In the camps, the takeover is almost complete. Buildings are dissolving under the weight and embrace of trees and vines growing through and around them. As we walk on the paved road back from Fern Lake, we see little lizards disappear in ever-widening cracks in the pavement. I want this to continue to its natural conclusion, yet I know that is not possible. It is not reality.

When I was small my family moved from a brick tenement building in North Minneapolis, Minnesota to the new suburbs. For a child who had only seen cement, bricks, and pavement the contrast was jarring. Our new neighborhood was built on what had been a potato farm. The yards and streets were mud. The small houses were all the same, with the builder specifying that each had to be a different color. My mom chose green.

About a mile north of the last house, I found “the woods.”  All the neighborhood kids called it “the woods.” We were from that point on free range kids. We would ride our bikes, wallow in the mud, and go to the woods. I could spend hours in the woods, a place overgrown and tangled with strange plants like Jack in the Pulpit, and the home of toads and salamanders.

Just beyond the woods was Sally Norbeck’s farm. Sally and I became friends. I could not have pets, but she let me ride on her pigs and play with her barn cats. We also mucked around in the woods. Ever since that time I have felt a sense of peace and comfort in overgrown and unkempt places.

My mother died in the little greenhouse in 2007. My father lived in it until it became impossible, and my sisters convinced him to move into a senior apartment complex. As long as he still lived there, I went back to the little greenhouse. I walked or drove around my old neighborhood. Sally’s farm is long gone. In its place is Target, Applebee’s, and a bunch of car dealers. The woods are no longer woods, they are a few large trees in a green lawn, a park.

Gone is the dark, cool cathedral of trees, vines, and mysterious plants. I found the loss of the woods the hardest part of this change, of this progress to take. Sadness washed over me each time I saw what was left of the woods.

SDC has become my woods. So few other hikers know about these trails, that sometimes we only see one or two others on the trails or roads. My husband Dave and I usually do not talk much on these walks. We may point out something that the other might miss, a lizard, a bird, wildflowers, a building with a million woodpecker holes, or the ugly cell tower. I will enjoy this as much as I can, for as long as I can. When we walk by the old cemetery, I feel a wave of melancholy and a vision of long ago suffering.  We usually say nothing on this part of our walk.

Progress and reality are coming, as they must. Just letting it be is not possible. There is monetary and social value to be had. Letting the green and growing take over at SDC is not in the plan. My only hope and dream for this place is that it not lose its magic and mystery completely.  When I hear “planned community,” I see white-washed buildings with tile roofs, someone’s idea of Sonoma architecture. But, maybe, just maybe beyond the main campus we can let the lovely decay of the old places continue.  Maybe we can let the vines overtake these old camp buildings and become living green sculptures.  Maybe the trails and paths do not have to be manicured and paved.  Maybe I will not lose “the woods” of my senior years, as I did “the woods” of my youth.

5 thoughts on “The sad beauty of inevitable decline”