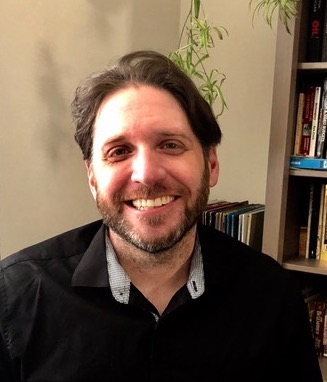 The Sun: What’s your role at the Sebastiani?

Tony Ginesi: I’ve been with the Theatre since 2017. I’m the general manager. Roger Rhoten is the executive director, and we work as partners. When it was closed, we offered curbside concessions, and online movies – it was mostly to keep in touch with the community. It was the support of donors and the Sebastiani Theatre Foundation that kept the Theatre going.

Excited to have the theater open?

It feels great to be open. It was not easy getting ready, and we do a complicated cleaning protocol between every show. Right now we are keeping attendance to 35, although we are allowed up to 70. Everyone has assigned seats. You can book online or walk up. And you can order your concessions ahead, so no waiting.

What was your childhood dream?

I wanted to be a veterinarian. We lived in San Francisco and I grew up obsessed with animals. We had a dog, two cats, and a couple of rats. Then briefly I wanted to be a police officer. But in 6th grade, we moved to Sonoma, and I started working on lighting with my father’s company, Illusions Lighting and Sound. I’ve been in love with theater ever since. I was accepted to college as a theater major, but at the last minute, maybe because I really loved music videos, I switched to film studies at the Academy of Art College in SF. Out of school I worked for Images in Motion. We did kids TV show pilots. I left that to work with my dad at Illusions. In 2005 my brother Chris and I and a friend started a theater company. I’ve been involved with theater ever since.

Tell us about that venture.

Our company was called The Narrow Way, and over ten years we did 60 fully-staged productions, mostly in Santa Rosa. We took a lot of risks. We wanted to bring theater a younger generation would enjoy. I did all the lighting and sound, and all the sets. It was really “guerrilla theater,” multimedia and cutting edge. For instance at the Glaser Center on Mendocino Avenue in Santa Rosa, we would project onto the tall brick wall behind the players. We did a post-apocalyptic Julius Caesar and a Coriolanus set in the Old West. Mostly we did original plays.

Tell me about your family.

My wife is from Santa Rosa, and she and I have been together for 20 years, married for 12 of those.  We have two daughters, ages 11 and five. My wife’s a nurse and it was really scary for us, as her work was in a Covid unit in San Rafael. Early on we worried about the national shortage of PPE. But we were lucky and none of us got  sick. My brother Chris got an M.A. in acting at University of Edinburgh, and he’s in London now, looking forward to getting back to work as an actor when the theaters open. My father’s business, Illusions, that started with local plays at the Sebastiani and the Community Center, now goes to far-flung places, and is very successful. I’ve stayed working with him when I can. It is always worth the travel because we are able to create magical spaces for that short period of time and amaze people, and give them lasting memories.

Talk about working at the Sebastiani.

Being here incorporates my love of theatre, music, and movies. And that is the hardest thing about it too. Roger and I almost single-handedly book, organize, and run everything. We have candy counter staff and volunteers and the Board does a lot of work behind the scenes, but Roger and I do everything from running lights to booking the acts and working out the contract details, designing posters, sometimes finding hotel rooms all the way down to stocking the candy counter and projector maintenance. I love getting to create shows, doing the graphic design for our posters and website, and working with promoting the filmmakers’ movies.

Right now we’re looking at building an outdoor concession cart that would include Sebastiani merchandise and memorabilia. One of the greatest things about working here is having adults come in and tell their stories of growing up at the theatre and how their kids enjoy it now. My dream is to keep growing the Theatre into a centerpiece of Sonoma for locals and visitors alike to enjoy for generations.