Clash of paradigms II:  The way out

Posted on August 1, 2021 by Stephanie Hiller

Conferences are something of a show, a stage for grandstanding of one sort or another, and putting on a good face. The real work takes place backstage, where connections are made, and more intimate conversations may take place.

In this day of zoom communications, there is no backstage. But the United Nations Food System pre-Summit held at Food and Agriculture (FAO) offices in Rome, did bring together a live audience of 500, with the virtual participants numbering 20,000. The select 500 were representatives of governments and humanitarian agencies.

Allegedly the event, which called itself the Peoples’ Forum, was meant to be inclusive, and they certainly tried, setting up online “Dialogues” (where not much was said), twitter feeds and everything they were able to muster to bring in people from the many sectors that compose our complex global food system, displaying visible diversity of nation, gender and race. They emphasized repeatedly the important role of women in farming. They acknowledged repeatedly the knowledge possessed by indigenous farmers.

They claimed to welcome everyone; I had no problem registering. But not everyone felt included.

The Committee on Food Security (CFS), a UN committee of long-standing, was not included in the planning. The CFS represents small producers; it has had a powerful influence on United Nations food policy, which has moved closer to embracing agroecology. It has resisted the over-influence of corporations and the urgent and demanded support for small organic farms.

But along with other producers’ groups and some 500 scientists, CFS refused to attend, charging that the event was promoting corporations and large scale industrial agriculture. They set up a boycott, presenting alternative discussions online and protests in the street.

On the second day, the message of the boycott burst through the platitudes of the main conference. In the afternoon, the conference released a press release in response.

“For instance, of our 29 members, a third [of the leadership] are from civil society and we have representation from indigenous groups, from farmers, with important voices from young people. There is, out of the 29, only one [from the] private sector.”

CFS may have been welcome, but they were not given a platform. 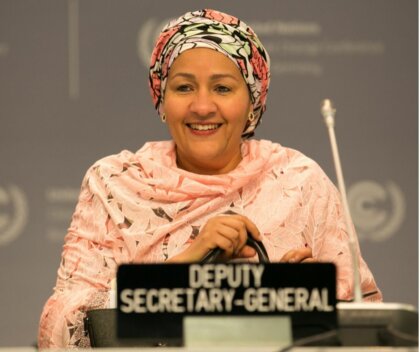 Ms. Amina Muhammed is an impressive figure. She was one of the few speakers who addressed real issues in a concrete way. Statuesque in lovely native costume, (she is Nigerian), hair crowned by a scarf, she spoke clearly and persuasively from the heart. But maybe she was also a little like the white liberal who has just been accused of racism. What, me? But she, at least, had aimed to fulfill the intent of the conference to be inclusive.

In the final address to the conference, she nudged the protesters, saying “those who are not here because they feel they are not included must be in the room.” Sounding a little like a parent addressing an angry teenager, she urged them to “show up,” where disagreements could be addressed. She included the Committee on Food Security.

“I think we can say we’ve fully engaged the world.” She went on to outline the plan of action for the next seven weeks leading up to the final Summit in mid-September.

Clearly the conference tone had shifted. More feeling had entered the discourse. The food crisis, which is also a climate crisis, was no longer an abstraction.

Leaders of the International Fund for Agricultural Development, the Director General of the GAO, and the head of the World Food Program (WFF), stressed the urgency of the time. “The clock is running and people are dying,” said the fiery HE David Beasley. In his job as head of the WFF, he said, “we have to choose which children can eat and which will die,” and that is because “we don’t have enough money” when two trillion goes to the military and only 1.5 billion goes to humanitarian aid. “Shame on us!”

He chose to end on an encouraging note. “We’re going to build a healthier world and we’re going to use food as a weapon of peace!”

This meeting of the UNFSS was a pre-summit. Its goals were to lay out the work to be tackled at the upcoming final meeting in New York in September. Whether that will retain the humanitarian flavor that emerged at this meeting remains to be seen. Transforming agriculture will cost money. Who will pay? As usual the need for funding makes groups vulnerable to the control of the funders.

The almost total disregard of the important role of the soil in preserving the climate is concerning, however.

A proposal presented and incorporated at the Paris COP for “Four per 1000” – recommending ecological farming on .4 percent of global lands with carbon sequestering plants — was not presented. This urgently needed, relatively inexpensive and natural method to drawdown carbon from the cloud of CO2 that chokes the atmosphere, was widely approved by governments at the COP. Since 2015, the organization has developed a body of research supporting its proposal and has garnered support from hundreds of agricultural agencies and programs. It’s essential that this solution be primary at the upcoming Food System Summit and emphasized at the November COP in Glasgow.

It is much less difficult than eliminating emissions which, of course, is also necessary.

The September UNFSS meeting will set the tone and policy for the work that must be completed during the next “nine harvests” before 2030, when the UN is aiming to reach its 17 Sustainable Development Goals (SDGs), one of which is the elimination of hunger. 2030 is also the IPCC’s target for reducing global emissions by 50 percent.

Certainly the formidable ag corporations will be at the final summit. One can hope that the humanitarian spirit generated at this pre-Summit will gain strength to resist the power of corporate money to dictate policy. At least some (perhaps small) movement is there.

Whatever happens on the global stage, we have a task here at home: To insure the survival of small organic farms in Sonoma County by doing whatever we can to support and encourage them.

For us, they will be the bulwark against the flood of “Impossible Burgers” and other genetically-modified, laboratory-produced foods that are likely to be showing up, unlabeled, on the shelves at Safeway. Impossible Burgers, a totally synthetic food substitute promoted by Bill Gates, are already on sale at Trader Joe’s.

Agriculture will be the first to suffer severe impacts as climate change progresses. Local, regenerative, organic farms could be our only hedge against starvation. In any case, they are the reflection of the new paradigm that most of us embrace, a way of life that does not rely on the costs and emissions of international trade and impossible endless trade.

Small farmers will need money and water to survive the drought and continue their great work of producing foods without chemicals and restoring soils.

Please support our small farmers, and our state policies that support them, and demand that the UNFSS Summit, and the upcoming Glasgow COP declare strong policy garnering the benefits of agroecology.

You will find the list of organizations that have embraced .4percent at https://4p1000.org/sites/default/files/francais/original_partenaires_membres.pdf/ The California Department of Agriculture, the Sierra Club and the Nature Conservancy are among them; let them know how much we care about our small farms.

Read part one: The threat to our food supply