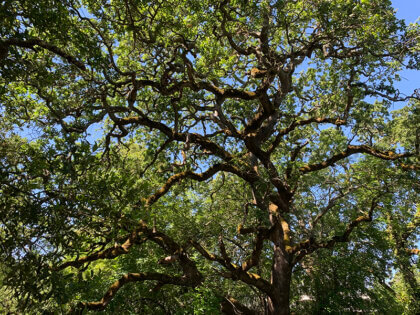 The trees and shrubs lining our streets and filling front and back yards help form our primary urban landscape; their shade, varied forms, and range of colors add texture and movement to an otherwise concrete and asphalt tableau. Some call this an urban forest, but the yards, parks, and tree canopy we enjoy form more of an urban garden, an arboretum, not a forest as nature produces.

Natural forests contain a variety of plants, but generally species are limited to those adapted to particular soil, water, and climate conditions. Some species of plants form a kinship with others, their respective growth habits working in concert with other species to form a collective plant community. These communities, in turn, provide specific conditions beneficial to animal life, and insects, birds, and mammals congregate and thrive within particular plant communities. Natural forests do not require the intervention of human hands; dead plants and fallen trees are as much a part of the ecology of the natural forest as are seedlings and sprouts.

Our urbanized situation has much more in common with a cultivated garden than a natural forest. The varieties of plants, with the exception of some species like oaks, which preceded the intrusion of civilization into the area, have been chosen and planted by intention. That intention was often aesthetic, based upon appearance only. In this way, our community has been populated with trees and shrubs that would never be found together in a natural forest, let alone in this clime. Dogwood, Ginkgo, Beach, Maple, Magnolia, Poplar, Redwood, Cedar, Eucalyptus, Birch, etc., and even exotic, subtropical species like Jacaranda and Erythrina are crowded together willy-nilly on streets, in rear and front yards.

Because each homeowner selects the plants and trees desired, there’s no overall urban plan or scheme that has been implemented. This creates surprising and often stunning sights of non-native flowering trees and bushes, but also the reality of an uncontrolled urban garden left largely to its own devices. As any devoted gardener knows, the essence of gardening is control, and when control is lost, forces that underlie and regulate natural forests are not present, and problems often arise. Species incompatible with each other compete for light and space. Insects that infect and destroy are attracted. Plant damage and disease go unattended, leading to further problems.

Educating the public and setting proper tree maintenance standards can alleviate many problems that emerge in an urban arboretum. Topping, pollarding, and improper tree pruning can cause long term damage and structural weakness. Choosing the wrong species for a location can create all sorts of safety problems.

A helpful approach to preserving our urban arboretum might include a city-wide, online, mapped inventory of our significant species. Such a database would help gardeners and homeowners identify and locate mature specimens, and that would in turn provide a better sense of how each species, particularly trees, grow, mature, and appear.

Many tree species are long-lived, and when mature specimens are observed, it adds the perspective of time to planting plans. It’s worth noting, most trees will outlive the person who plants them, and their shade and appearance will inform future generations, perhaps many.