The Ins and Outs of Fast-Food 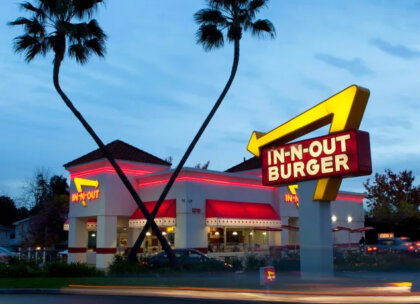 My wife and I offered to drive our granddaughter to an appointment in Santa Rosa, and as we neared the destination, we passed an In-N-Out Burger. In-N-Out is a fast food joint, in case you don’t know, and apparently very popular. My wife and I had never eaten an In & Out Burger, but my granddaughter had; her appointment ended at 6pm, and on a lark we pulled into line.

The line into In-N-Out stretched from the take-out window all the way around the building, out into the street and filled the left turn lane for nearly a full block, but we were in no rush and curious. Once in line, however, we found ourselves trapped, captive to the so-called fast-food experience. It took three-quarters of an hour to inch our way to the spot where we could order.

Now I’m no expert in fast food burgers. I’ve eaten perhaps a half-dozen in my entire life. From what my granddaughter tells me, however, In-N-Out Burgers are highly praised by those who eat fast food. “Their fries are not so good,” she offered, “but my friend Oliver loves their burgers.” A good portion of the forty-five minutes in line was spent in discussion about the merits of fast food and the names of burger options.

Naming fast food burgers is not rocket science, but such branding does have a way to make it into common parlance. Names like Double Jack, Whopper, Big Mac and so forth roll off the tongue like old family friends. In the case of In-N-Out Burger, their name leader is the Double-Double. Like it sounds, the Double-Double features two, count ‘em two, meat patties and two slices of cheese. What type of cheese, you may ask? When my wife asked, the young man with a headphone and little white paper hat replied, “yellow.”

Finally, after nearly an hour in line, we picked up our order and paid the bill. The food is delivered in little cardboard trays, all neatly packed and ready to eat, but the next step in fast-food takeout is finding a place to eat it. So it was we found an empty parking spot on an adjacent street and unpacked our food.

The tagline that one vender uses at the Friday farmers market here in town sums up my opinion: “Life’s too short to eat crappy meat.” My In-N-Out Burger did not change my mind. As burgers go, I rate it a crappy D-minus. The meat patties were flavorless, the yellow cheese equally so, the bun soggy and the special sauce not special at all. Consuming it was the fast part in fast food, that and wiping my greasy hands on the one napkin In & Out provided.

I won’t be returning to In & Out Burger anytime soon, if ever. As we drove home, my granddaughter noted, “Hey! We just passed Chik-Fil-A.”

3 thoughts on “The Ins and Outs of Fast-Food”