Does the universe have a purpose? 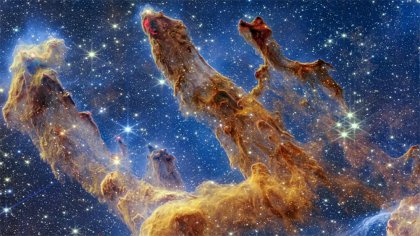 Aristotle thought so, and his ideas dominated for many thousands of years. Both living and non-living matter, he believed, were purpose-driven, carried forth by an initiating force towards a goal in a process he named Telos, what we today call teleology.

Living things, certainly, demonstrate teleology, at minimum an appearance of purposefulness and at maximum what some see as demonstration of divine will. Life is a complex, adaptive system, seemingly willful in its aspect. But what, if it is purposeful, is life’s goal? Is life fulfilling the purposes of Universe?

Although we understand ever more about how living systems work, we still have no explanation for how chemistry becomes biology, i.e. what process underlies non-living matter becoming alive. Charles Darwin provided an alternative to Aristotle’s by proposing that natural selection replace Telos, but he provided no such proposal for non-living matter.

Believing non-living matter is purposeful requires letting go of human frames of reference. Science informs us that carbon, calcium, magnesium, hydrogen, oxygen and other elements composing living systems are themselves non-living matter but, nonetheless, are essential to the survival of life. The combination of chemistry, physics, and chance points to the proposition that affinities and dislikes at the molecular level alone can generate complexity that over enough time becomes sufficiently complex for life to begin. This still does not explain why affinities and dislikes, like positive and negative valences, even exist at the molecular level, or for that matter the atomic and subatomic levels.

At the subatomic, the quantum realm, even determining the validity of objective reality gets fuzzy. Not only does observation of non-living matter by living matter appear to change the characteristics, appearance, and behavior of non-living matter, but its appearance itself may be the result of non-local forces. One of quantum entanglement’s most mysterious possibilities is that what appears to us as a three-dimensional world might actually be a holographic projection of information bound within a deeper, two-dimensional reality, an idea generated from observing Black Holes and development of the mathematics that explain them. When it comes to quantum purposefulness, remind me to tell you a story about the quark that wanted to be a proton.

Mathematics, including that of the quantum realm, is remarkably accurate about predicting the course of events and tracking their causality. Aristotle opined that of the four types of causality – Material cause: the matter out of which an object is made; Efficient cause: the source of the object’s principle of change or stability; Formal cause: the arrangement, shape, or appearance of an object; and Final cause: the goal of the object – reflect the teleology of the universe, ultimately invisible and unknowable at our human scale. In this way, Telos serves to animate the inanimate, adding purposefulness to every rock, stone, pebble, grain of sand, molecule, and atom. When considered The Hand of God or Expression of the Divine, teleology gets us off the hook of rationality, swirling purposefulness and Final Cause into the cloud of unknowing.

It is an undeniable fact of science and nature that the border between the living and non-living is blurry. Non-living gold, in an invisible act of self-confirmatory feedback, remains gold, after all. Some universal, immaterial force seems to be at play in all material things – affirmative, reifying, declaratory. As to its purpose? The choice is yours.