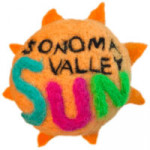 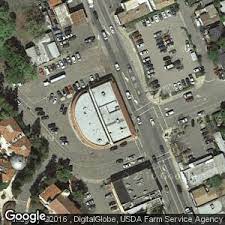 The plan never progressed past a “scoping agreement” and the discussion phase — which included two Mattson-hosted public meetings — and no formal designs or building plans were ever submitted. But “the issue became increasingly divisive and contentious,” Gorin said.

Critics weren’t happy with the idea of County money going towards a project that benefitted Mattson, who has acquired 80+ Sonoma Valley properties over the past several years and has failed to deliver on several commercial projects.

In an effort to calm community concerns and continuing divisiveness, Gorin said, “I made the decision to terminate the agreement after listening to the increasingly negative comments.”

“What could have been an opportunity to develop a community plaza as gathering space for the Springs, while maintaining and expanding parking at this key location, instead became focused on perceived distrust and accusations regarding the motives of Ken Mattson and the County,” Gorin said. 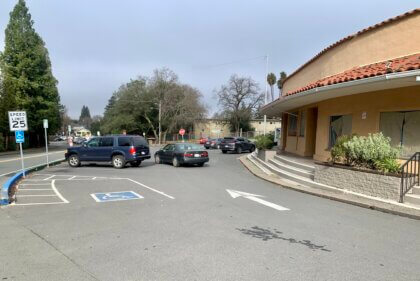 Gorin said that several years ago Ken Mattson floated the idea of a unique public-private partnership for this site at 18092 Sonoma Hwy, which he owns. He proposed the idea to design and finance construction of a podium covering a newly constructed, County-owned parking garage.

On top of the podium, there was to be a mixed-use development from Mattson and a community plaza, potentially financed with County funds allocated years ago for that purpose. The County explored this concept, and a scoping agreement for community outreach was signed with Mattson.

Opposition became more strident, Gorin recognized. “It is increasingly apparent there is not a base of support for this potential collaboration.”

There may be continuing community conversations about a potential community plaza when The Springs Specific Plan is released this Spring, Gorin said, “and perhaps the community comes to agreement on an appropriate location for a plaza on the corridor.”

The current parking lot will remain as is. The County has begun issuing parking permits to the surrounding businesses for their employees to park at that lot. Funding previously allocated by the Board of Supervisors for a community plaza will remain in that fund until it can be used in the future – or be re-allocated during the June budget process

“Within this conversation, sadly, the voices of our business community and Latinx community members have been lost in the negativity of public comments,” Gorin said. “I hope the community can come together on how to support the businesses along our corridor and consider a plaza as the center/heart of the community.”

Gorin said she will now focus on completing the financing and renovation of Larson Park. “I thank everyone for their focus on the potential benefits of a community plaza over the past few months and look forward to working with you if agreement and support is reached in the community.”