I love bunch grasses. They are easy to care for, natural looking and come in a huge variety of colors and sizes. One of the best things about bunch grasses is, deer avoid them; if deer browse your garden on a regular basis consider bunch grasses. Not all bunch grasses are drought tolerant, though. Some prefer moist soil. Be careful when you make your choice at the nursery.

I think that most bunch grasses look best when they are clustered together in a mass planting, but there are exceptions — a large bunch grass with dramatic plumes can stand alone as a focal point. Diminutive grasses look sweet scattered throughout a rock garden if they are placed in a repeating pattern.

Last April I wrote about three California native bunch grasses. These are deer grass (Mulhenbergia rigens), Idaho fescue (Festuca idahoensis) and leafy reed grass (Calamagrostis foliosa). All are water-wise and deer resistant. I encourage you to incorporate these native gems into your landscape. Today I introduce you to three more garden-worthy specimens. 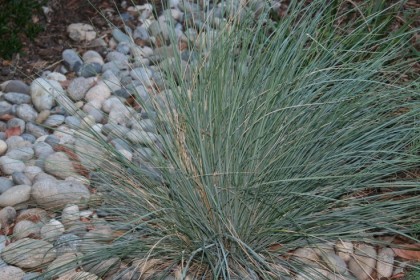 California fescue (Festuca californica), shown above, is native to California and Oregon. In the wild it is typically found in large swaths under native oaks. It is accustomed to partly shady conditions but can take full sun along the coast. This attractive grass grows about 2’ tall and wide and is known for its blue-green to grey-green firm leaves that arch up and outwards. The flowering stalks rise above the foliage and emerge blue-green. As they age they turn golden beige. California fescue is a cool season plant. New growth appears in early spring and will mostly fade to tan over the dry season if not irrigated. In the garden this plant looks best with some irrigation. A number of cultivars such as “River House Blues” or “Horse Mountain Green” have been developed for specific shades of blue, green or gray foliage. Consider this plant for a woodland garden. 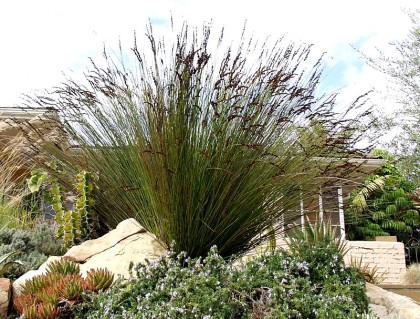 Cape rush (Chondropetalum elephantinum) isn’t a bunch grass. In fact, it doesn’t even belong to the grass family. But it certainly looks like a grass, with tough, wiry, medium green, upright stems that form dense clumps. It is a large specimen growing approximately 5’ tall and wide. Cape rush creates little brown flower clusters at the tips of its branches that cause the plant to arch elegantly outward. Quite versatile, it thrives in full sun or part shade. It performs well in both west and dry soils. Maintenance requirements include removal of the older brown stems, if that look bothers you. Some experts warn us not to cut it back as the stems will not regrow. 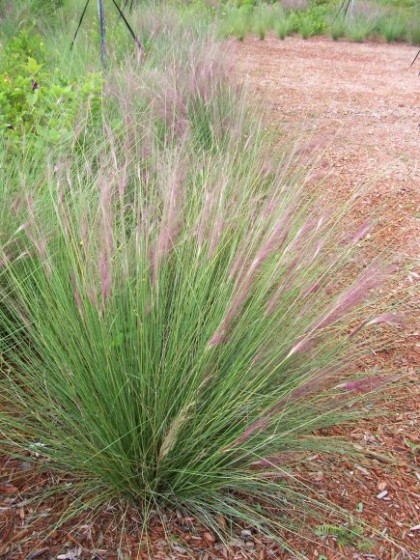 Blue grama grass. (Bouteloua gracilis) is a small, fine-textured, medium green bunch grass with multiple landscape applications. It grows 8-14” tall. Because it spreads (slowly) it that can be grown as a natural looking turf substitute or used as the featured grass in a dryland meadow. It prefers full sun and can take most soil types. It is known for its unusual flowers that appear in spring and summer. The book “California Native Plants for the Garden” describes blue gamma grass flowers as charming and shiny, as “the straight toothbrush-like spikes are held perpendicular to the stalk and curl gracefully as the fade to a straw color.” This is a unique plant. It is also a tough grass that takes heat, foot traffic and stands up to deer. Blue gamma grass stays green all year on the coast but turns beige when during the dry season when planted inland.