Is La Niña on the way? 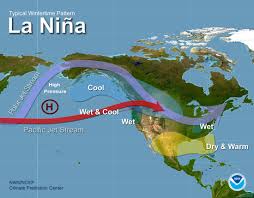 Last year’s El Niño turned out to have less impact on California than expected — the forecast for much higher rainfall did not come to pass, though precipitation totals achieved nearly normal levels and reservoirs in Northern California refilled. Now we are entering a period climate scientists call La Niña.

El Niño is characterized by higher than normal temperatures in the Northeastern Pacific Ocean, the effects of which change weather patterns. La Niña, which means The ‘little girl’ in Spanish, is the opposite, the anti-El Niño. Periods of La Niña present below-average sea surface temperatures, what’s termed simply as “a cold event” produced by cold water upwelling from lower in the ocean. These two phenomena represent opposing phases of what’s called ENSO, which is shorthand for El Niño-Southern Oscillation. Particular to the tropical Pacific Ocean, ENSO strongly influences weather patterns globally.

Both La Niña and El Niño disrupt circulation patterns in the atmosphere which ordinarily connect the tropical and middle latitude climate zones, and this disruption affects and modifies the mid-latitude jet streams that direct global weather pattern distribution. Accordingly, ENSO affects rainfall and global temperatures, not only in the United States, but also all across the globe.

As it pertains to California, the effects of La Niña this winter could be significant. According to the Climate Research Division of the Scripps Institution of Oceanography in La Jolla, CA., forecaster Dave Pierce said, “I would be concerned about the drought continuing.”

Historically, a La Niña year in Southern California is typically 25 percent drier than an average year. In Northern California, the difference in precipitation is only about 15 percent. Further north, it’s more likely that La Niña will produce above-average rainfall.

On the other hand, the Director of California Water Resources was quoted in The New York Times saying the state is “just one dry winter away from returning to where we were,” this despite that drought conditions have eased, particularly in the northern part of the state.

It is typical that La Niña will immediately follow an El Niño event, but not an absolute certainty. Both El Niño and La Niña events happen every three to five years but the period of oscillation can vary between two and seven years. Typically, either can last from six to nine months in duration.