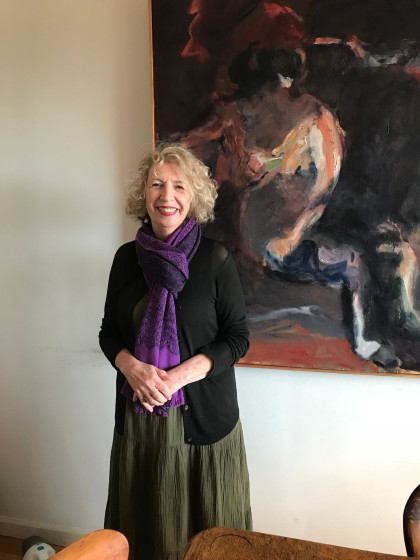 Gail Chadell Nanao’s stunning, brooding artworks are on display through June 10 at the Sonoma Valley Museum of Art. The show’s handsome catalogue is well worth the read; it covers all the highlights of Gail’s career and several color plates of her paintings. For a different perspective, I wanted to know the person at the end of the brush, her thoughts and challenges, so I made an appointment to visit her in the studio.

Gail’s home is tucked into the Berkeley hills, enveloped in a mini Asian forest of trees and plants lovingly developed over many years. Meeting me at the door was a petite, soft spoken woman with blonde curls and a genuinely welcoming smile. It struck me as remarkable that she is physically able to maneuver large canvases measuring 68” by 98”. She invited me in and gave me a tour, telling stories along the way.

Though compact in size, each room of the home is carefully curated, displaying treasures from Japan and other countries, as well as Gail’s art and that of her late husband, Kenjilo Nanao. A native New Yorker, Gail met Kenji in San Francisco in 1961, when they were both students at the California School of Fine Arts (now known as the San Francisco Art Institute.) Kenji was bold and charismatic.

“He could really tap into a place,” she said of Kenji. “He was larger than life.”

At the time, the art movement was toward a brave new world of bold abstraction in painting, but Gail and Kenji focused on figurative expressionism, a style that Gail still embraces. They married in 1965 (she added, “although we were still competitive!”) and spent 48 wonderful, tumultuous years together before his death in 2013.

“We traveled to many places together, visiting art museums and galleries, having residencies in Rome and Oslo, and four months in Paris,” Gail said. “The most memorable place we lived was Japan in 1964-1965. We had a tiny apartment with no hot water and no plumbed toilet or bath. I had to walk 20 minutes each morning to the communal bath. Later, I found a shopping area with real bathrooms, and frequently shopped there so that I could use a Western toilet.”

Gail smiles at the memory. “It wasn’t so bad. It was the Sixties, we were young and adventurous, and we took it all in stride.”

She continued, “After that, we moved back to the San Francisco area, first to Potrero Hill, followed by five years in Mill Valley. My uncle died and left me some money, which we used to buy this house in 1972. We converted the lower level of the house to studios, dividing the area into two parts: one for paintings, and one for drawing, small watercolor studies, reading, and generally taking care of business. A perfect place for both of us to create art. Years later, we both moved into separate outside studios to accommodate larger art.” 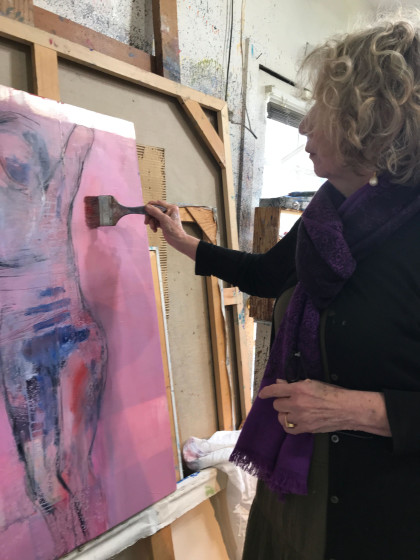 Speaking about the paintings in process, Gail mentions that she makes many decisions along the way. She uses primarily large size canvases; sometimes the process is easy, and she can finish a painting in one month, but there are other times when it could take a year or two to complete. “You just never know,” she says.

The paintings on the studio walls show heavy brush strokes and drips. They pulsate with internal chaos. She explained that all her artworks are self-portraits, depicting various times in her life. Each one has deep, personal meaning. She showed me some of her small watercolor studies, jewels in their own right. Photographs and articles hung on the walls, glimpses of the couple’s adventurous life and history together.

What switched on the art spark? “My older brother saw something artistic in me when I was six years old,” she said. “He was so generous; he plied me with all kinds of art supplies and art books, and I loved it all. At that time, though, it was just something I did. I didn’t think I was different from other children.”

Does she adhere to a specific daily routine” “Generally, I go for a swim each morning at the local center – I actually only learned how to swim in 2016, so it’s a new activity for me. Then breakfast at home, into the studio for about two hours, lunch, and back into the studio until whenever. Sometimes until late at night.”

Not all of her work is oil on canvas; she enjoys making ceramics too. The ability to relax her mind from one medium to another allows her a break in the tension. Large hand-painted ceramic pieces on a display table have an unusual theme, one that’s not immediately obvious. It is, well, racy; men and women engaged in bawdy activities meant for mature audiences. “I call them my ‘dirty dishes’ and love to surprise dinner guests,” she laughs. “You should see their expressions when they finish their meal and see the art on the plate!”

After spending two delightful hours with Gail, on the way out I noticed her traveling watercolor paint box. No big fancy set befitting an artist of her stature – instead, a child’s paint set in a colorful tin box entitled “Pirate Paint Box.” That precisely explains this talented, passionate world-class painter with a wicked sense of humor.

Jackie Lee is an artist living in Sonoma. A supporter of the arts in all its forms, her focus is on showcasing individual artists and events as well as those represented by established galleries.