What’s with the chaos in Sonoma’s Planning Department? 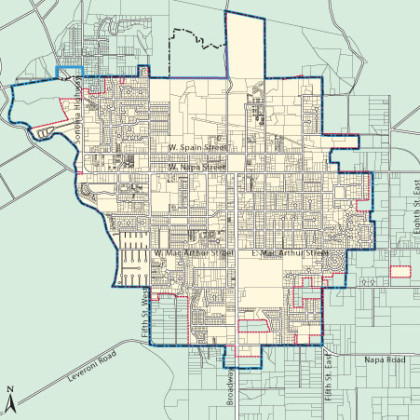 The city is smack in the middle of processing several major project applications — the Napa Street hotel, the Cheese Factory tear-down and replacement, the Gateway housing and retail project at Broadway and MacArthur, among others. Yet six months after the former Planning Director David Goodison gave his notice, followed by the abrupt departure of his interim replacement, the city now finds itself recruiting for the post yet again.

The Planning Commission itself has directly expressed its serious concerns: it must act on major proposals, and now must rely on a part-time consultant unfamiliar with Sonoma. To say the commission feels uncomfortable is an understatement, and the question of how Sonoma ended up in this situation is legitimate.

Notably, the sudden departure of the City of Sonoma’s Interim Planning Director, Jim Moore, has raised concerns about management impropriety, possible violations of the Brown Act, and charges of playing politics with development project approvals.

Moore, who began work for the City a month before Goodison’s departure, and resigned from his interim position after less than a week on the job, was contacted by The Sun. He shared his reasons for resigning and raised various concerns about Sonoma City Manager Cathy Capriola.

Capriola flatly denies any improprieties, and said her actions are serving goals set by the City Council. “It is clear from public meetings that the City Council wants to have projects and issues moved forward for decision-making for the benefit of everyone involved,” she told The Sun by email. “As the City Manager, my job is to ensure the City staff delivers Council’s direction and to manage the organization.”

Moore said his concerns began “shortly after I signed my initial half-time contract with the city in which I was designated ‘Deputy City Manager.’ Cathy came into my office after one week and told me she realized she had hired me to fill a position that did not exist, and I needed to remove my reference to it online.”

Moore had been engaged to work half-time for the city on staffing analysis and future administrative matters while Planning Director David Goodison was completing his last month of employment with the city, and during that period Moore said he met with various people — staff, commissioners and councilmembers — in order to gain perspective about Sonoma.

“The next strange thing to happen, one day after I assumed my Planning Director role, was being told that Rob Gjestland, second in command in the Planning Department, had previously submitted his resignation and the next day of work would be his last,” Moore said. “Nobody had ever mentioned it. I suddenly had almost no staff in my department.”

When Moore asked to meet with Capriola, he learned from Assistant City Attorney Veronica Nebb that he could not meet with Capriola on a Friday before a council meeting because “Cathy meets with each council member on Friday and goes over every item on the upcoming agenda with each of them.”

Raising concerns that such meetings might violate the Brown Act prohibition of “serial meetings,” Moore said Nebb told him that the meetings were for only for asking questions and sharing information.

Moore continued to feel such meetings were possibly improper. That concern was further exacerbated when a member of the Planning Commission told Moore that in these meetings the City Manager asked councilmembers how they intended to vote on agenda items. “I can understand meeting with the Mayor to go over the agenda, but I’ve never in all my years heard of meeting with each council member to discuss each agenda item,” Moore said, “let alone, how they intend to vote.”

The Sun has corroborated with a sitting councilmember that Capriola indeed asks how that member plans to vote.

Commenting on that to The Sun, Capriola said said such meetings are routine for city managers, and are allowed under the Brown Act. “The purpose of these meetings is to provide information, answer questions and identify other material that a councilmember may want in order to prepare for a public meeting,” she said. “I do not share my discussions with an individual councilmember with other councilmembers. In addition, I take direction from the majority of the City Council at a public meeting.”

“It is important to state that no councilmember ever makes any decision before considering all the information at a public meeting,” she said.

Moore is technically retired, and at the end of a long career in planning. He received his Masters Degree in Planning and Architecture, and interned with Sonoma Valley architect George Rockrise. He helped organize the 1990 conference in Sonoma Valley entitled “Valley of the Moon 2000” convened by the Valley’s architects and featuring a presentation by influential urban planner Peter Calthorp. He spent most of the last decade of his full-time career as the Planning Director in the Marin County town of Fairfax.

In his short employment with the city of Sonoma, he witnessed some additional events that he said bothered him. One was a meeting about the Draft Timeline for processing the application for the proposed West Napa Street Hotel. According to Moore, in attendance at that meeting were City Manager Capriola, Assistant City Attorney Veronica Nebb, Bill Hooper of Kenwood Development (the applicant) and himself. Having been told previously by Capriola that the hotel approval “has to happen before the new council is seated,” Moore’s concerns were heightened by a timeline that places responsibility for a project approval decision with a lame-duck City Council.

He provided The Sun with the dates and events on the printed plan titled “West Napa Street Hotel Draft Timeline” that calls for Planning Commission review on October 11. The timeline projects that an appeal will be filed, so includes a 20-day period before it can be put on the first available City Council agenda. That date is November 19. Though the election is November 6, the new council (there will be at least one new member) will be seated in December.

Capriola said “In terms of the West Napa Hotel, the current City Council heard the original appeal, giving direction in July 2017, and expected to hear the revised EIR in March 2018 based on the schedule outlined at the appeal hearing.”

Newly elected council members will not take their seats officially until the first week of December, leaving the approval decision in the hands of the council currently in office.

Did political considerations affect the timeline? No, Capriola said.

“Though the October fires and other development appeals created delays, I continued to move the project forward for consideration by this City Council since they have the most information on the project’s history and issues,” she stated. “However, good process and thorough vetting and analysis are required on development, and projects will ultimately come forward to the City Council that is sitting at that time and I have clearly communicated this to the developers of this project.”

The Sun asked one of the EIR appellants of the hotel project, retired Marin County planner Johanna Patri about this alleged meeting. “If this is accurate, it’s very disturbing. The appellants were not included in such a meeting nor were the appellants sent notices of the September. 4 Planning Commission Public Hearing on the revised Draft Environmental Impact Report. Nor has it been made known who on behalf of the City, the Planning Commission, or the public, will be reviewing the adequacy of the revised Draft EIR.”

Patri is concerned that the process lacks independent and thorough review. “If the city is playing politics with a development application, it’s not proper.”

Capriola told The Sun that “It is common practice for a city manager to meet with developers, appellants, community members and planning staff at various times, especially during our recent loss of staff, regarding development projects.”

It was a discussion of another development, The Gateway project at Broadway and MacArthur, that prompted Moore to resign.

The developer is Scot Hunter, of Broadway MacArthur LLC. Hunter had been in touch with Moore, when Moore called him and suggested some “design tweaks” which might settle some, if not all, of the issues raised about the housing/commercial development on the site. Hunter told The Sun that he had been looking forward to hearing Moore’s ideas, especially as the interim Director had architectural experience.

As Moore recalls, “The next thing that happened was a three-way call between myself, Cathy Capriola and Mr. Hunter, during which I was unceremoniously told that I had exceeded my authority and was not to have any discussions with developers unless a representative of the City Attorney’s office was present.”

Humiliated, Moore submitted his resignation a day later. Clearly disappointed by the unexpected turn of events, Moore carefully shared his feelings. “I believe deeply in the public process,” he told The Sun. “I’m still getting calls from people I met with while in Sonoma, excellent meetings.”

Planning Commissioner James Bohar was asked for his impressions of Moore, and Bohar conveyed confidence in him. “I thought he was a sharp guy,” Bohar said, “and I was very impressed with the way he ran what was his first and last Planning Commission meeting. He grasped the issues…I was very pleased.”

Bohar says that he’s heard nothing directly from City Hall about Planning Department staffing or Moore’s abrupt departure. “The commission should know more,” he added.

4 thoughts on “What’s with the chaos in Sonoma’s Planning Department?”