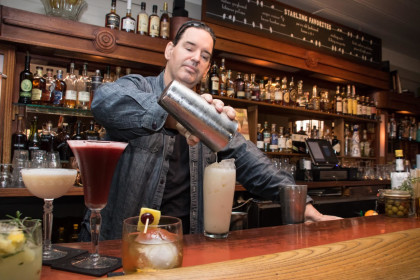 Signature drinks for a new generation

When life hands Fred Johnson lemons, they better be of the Meyer variety, so he can make a Gimbal Smash. As the cocktail virtuoso of The Starling Bar in Sonoma, Johnson calls on a arsenal of house-infused spirits, hand-muddled fruits, artisinal touches like homemade tonic and liqueur blends and artfully deployed garnishes to execute, with equal measures flair and precision, an extensive menu of signature recipes. Even the classics get a new-age makeover: the Manhattan, for example, is reimagined as the Brooklyn. Here, from an extensive repertoire of alcohol exotica, are a few notables. Photos by Melania Mahoney. 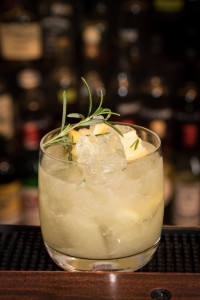 The Gimble celebrates citrus season by muddling chunks of Meyer lemons with fresh rosemary, then adding a good 3-year white rum and a sprinkling of ginger salt. 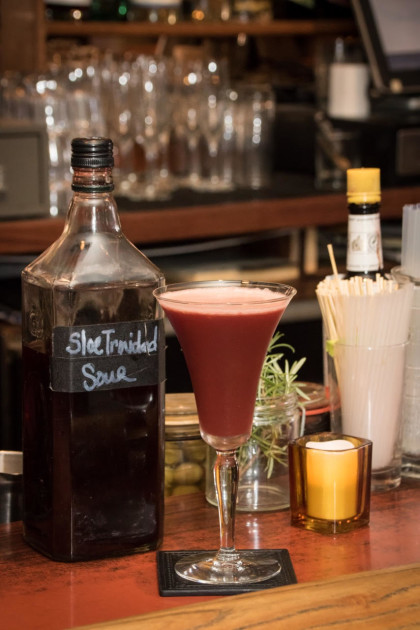 At Starling, when a guest says “wow me,” we all know this cocktail will do it. It’s especially good this time of year, with its bitter/sweet/tart combination and blood-red hue. Its name is a nod to the large quantity of Angostura bitters (produced in Trinidad since the 1800s) in it. Sara Washburn, one of Startling’s many excellent bartenders, created this version of the sour, adding Sloe gin, aquafaba and amaro in addition rye whiskey. 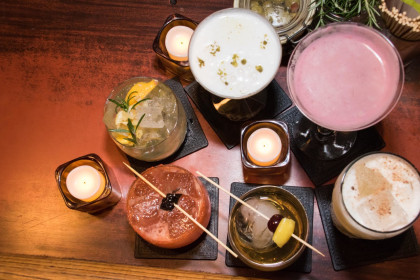 Yes, everyone has had a good margarita, but this riff on a margarita takes the palate down a different path. Created by Elizabeth Takeuchi-Krist, our margarita uses housemade Li Hing plum syrup, reposado tequila and salted plums. This is one of Starling’s all-time best sellers. 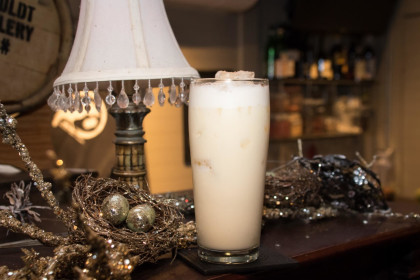 A fresh take on the classic Ramos Gin Fizz cocktail, Dick’s Fizz is named after Dickie, our Sunday afternoon guest-star bartender. Orange-infused gin is combined with fresh-squeezed orange juice (which, like all of our juices, is hand-squeezed in house), aquafaba, orange reduction syrup and cream, then topped with freshly ground nutmeg. The original version comes from 19th century New Orleans, where at one time it was so popular bars had up to 12 women on hand to shake these drinks til they were properly frothy. 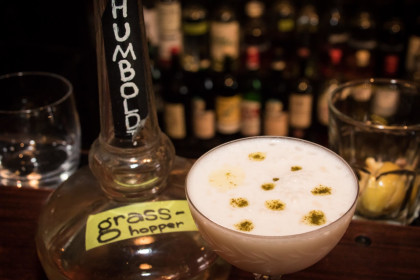 This is one of our Cannabis Cocktails, but you won’t find it on the menu; it lives on the secret menu. (The only way to see the secret menu is to know to ask for it.) The Humboldt Grass-Hopper is made with cannabis gin, housemade mint liquor, white crème de cacao, and heavy organic cream.  This is not your grandma’s Grasshopper, though she might find its gentle CBD calming effect an improvement over the original. 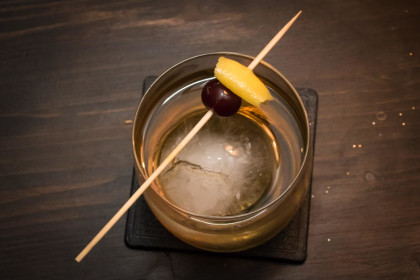 An old forgotten classic, one our great-grandparents drank (if they were soigné). Brooklyn residents saw many of the boroughs of New York getting their own cocktail, so a cocktail was created to honor the largest (and today, hippest) borough. Though this is a riff on the much-more popular Manhattan, it more than holds its own. Rye, dry vermouth, Luxardo Maraschino and orange bitters are barrel-aged, then served on a large ice sphere and garnished with a lemon twist and French brandied cherry.