Under the Sun: Jessie Barbour, centenarian 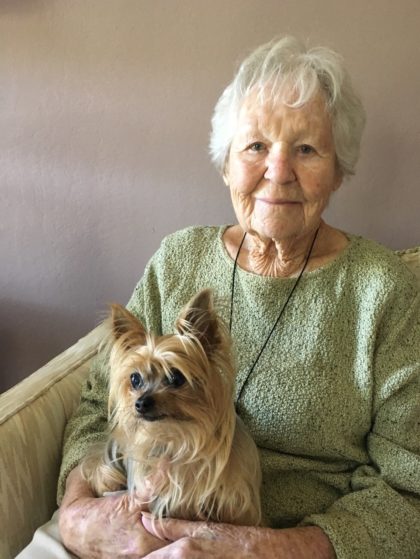 The Sun’s Anna Pier sat down with Jessie Barbour, who celebrated her hundredth birthday on March 13, 2019.

What are your earliest memories?

My memories go back to when I was five, when I started school in Napa. I went to first grade at the one-room school in a town that isn’t there any more, Priest, CA. I went with my three older siblings. My father was the principal and teacher. They needed nine students to open the school, and the joke was that they hired my father because he brought four. I was one of seven, including three half-siblings. I was the first child of my father’s marriage with my mother. I was born in San Francisco, at St. Mary’s Hospital – where I went back to study nursing.

Did you finish school in Priest?

Oh, no, we moved next year to Standard, which was a lumber mill town. My dad was the principal and he taught seventh and eighth grade. I did fourth and fifth grade at the school in Livingston, near Merced. They didn’t hire for more than a couple of years so they didn’t have to give tenure. In 1931 we moved to Santa Cruz, where my father was the principal of Live Oak School, and my seventh and eighth grade teacher. By then, we were in mid-Depression. The family moved back to Vallejo, where I went to high school. My father got a job teaching adults in the CC camps – Conservation Corps.

Tell me some of your childhood memories.

My grandfather had a small ranch in Napa, on the Silverado Trail, and we would stay there in the summers. I remember riding the tractor. We played jacks and marbles. I remember all of us playing Kick-the-Can. And calling out “Olly, olly, oxen free” at a certain point. What did that mean? Our family was different, I stayed really close to my two sisters who had special needs – the older one had a physical disability, and my younger sister Barbara, a developmental disability. She would go to school with me, and sit right next to me all day. Although she never learned to read, she could copy out pages from a book in beautiful longhand. I never figured out how she could do that, go from print to longhand. She lived with us till she was 18, when we had to send her to the State Hospital in Eldridge.

Women just got the vote in 1920, a year after you were born. Do you remember the first time you voted?

Not really. My mother and father were Republican, and I always voted like them.

How about a favorite president?

I really liked Reagan, until he starting sending people out of the state hospitals. I honestly think that was the beginning of the homeless situation. My sister was shipped all around. If she hadn’t had me looking out for her, it might have been really bad. 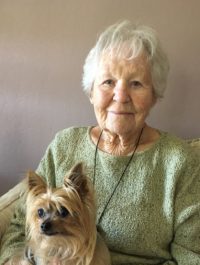 You married your high school sweetheart, Loran Barbour, in July 1939.   Yes, and Loran and I celebrated our golden wedding anniversary in 1989, but sadly, he died shortly after that.  My first job when I was married was at Napa State Hospital, in the TB and epilepsy ward. I took it because I wanted to see what it was like for my sister, living in the state hospital in Eldridge.

You were married just before the war.  Yes, and we lived in Vallejo, which was already a war town.  British ships were coming into Mare Island for repair. There were sailors everywhere. In 1942, after Pearl Harbor, Loran enlisted in the Navy. He was in the Bomb Disposal unit originally, and then Combat Demolition unit. This is what are now the Navy Seals. Loran led the demolition team on Omaha Beach, on D-Day. That’s where he was wounded. I remember getting the telegram telling me. Later he was awarded the Purple Heart, the Navy Cross, and other medals. I have sent a lot of his things to the Navy Seals Museum in Fort Pierce, Florida.

What did you do during the war?

I started driving military vehicles at the Mare Island Naval Shipyard. All sorts. A shipment of jeeps would come into Treasure Island, and 50 or 60 of us would go down in a bus, then drive the jeeps to Mare Island. I drove trucks delivering things manufactured on Mare Island to Treasure Island or San Francisco. And I drove busloads of sailors from Treasure Island to Mare Island. To get to work and back we took launches. Vallejo was covered in balloons to protect it, and we had blackout. I remember trying to drive home from the dock at 2 or 3 a.m. in the pitch dark. I had that job until D-Day. When Loran came home, and had recovered, we built a house for ourselves in Vallejo.

I wanted a totally different career, so in 1948 I enrolled in the House of Charm in San Francisco to become a fashion model. I worked for some of the great stores, Joseph Magnin, City of Paris, I. Magnin. And I did restaurant shows at places like the Fairmont. I did modeling for a couple of years, but it was so much back and forth, not just for the shows but for fittings and rehearsals. So in 1951 I went back to work on Mare Island, this time doing payroll for the Mare Island Grapevine, the newspaper. My sister needed me, so I stopped that job.  I had different nursing jobs, then eventually I went to work as office nurse for Dr. Cox, on Perkins Street. I stayed with him ten years. It was an interesting job because he was the only internist in town, and everyone sent their patients to him for EKGs and pulmonary function studies.

And lately you’ve been pet sitting?

That’s right. I stay in friends’ homes to take care of their pets. One cat owner said that her Patches had become much sweeter after two weeks with me.

How long have you lived in Sonoma?

Since 1961. But as a child I came over to Sonoma a lot from Napa. We went skating at the roller rink on the Plaza, across from the Carnegie Library. We would go swimming at the big mineral water pool in Boyes Hot Springs. Later I’d go there with my husband, who would dive from the rafters. In ’63 we bought a home for $10,000 on Mountain Avenue, where we lived for over 20 years. Loran came here to build some houses – one on Austin, one on Second Street East and one on Walnut. I would help out, even painting on a three-storey scaffold. In the ‘80s we moved to Temelec.

Do you have any tips for our readers about living such a long productive life?

I think it’s all in the genes. But there is a secret: to keep things at a “chronic” level, not “acute.”  I have broken my hip, both wrists, and my arm, and about seven years ago I had a bout with cancer in my jaw. I had chemo, and I’ve lost my sense of smell and taste. But it’s all been kind of fun.

Any downsides to living so long?

No, I don’t really think there are downsides to reaching this age. It’s kind of fun all of a sudden being so old. About four or five months ago I got a kind of “free feeling,” a sense of freedom. I didn’t know that I didn’t feel free before.  I feel different about everything. I can relax in the midst of a big mess.

Any advice for us? I live with mottoes, and I teach them to my great-nieces and nephews. “A bell is not a bell until you ring it.”  “Never put all your eggs in one basket.” “To thine own self be true.” Lots of others. And there’s one that I cut out and put up on my refrigerator:

I have no yesterdays,

Time took them away;

Tomorrow may not be –

But I have today.