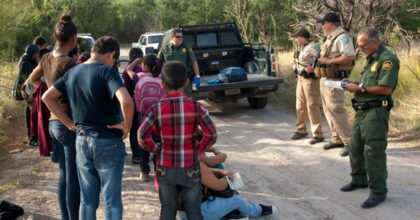 Given what’s going on in the world, to simply classify people trying to cross our border as “migrants” or “illegal immigrants” is inaccurate. The reality is that many people, often entire families, are more properly refugees, desperately seeking to escape depredations of crime — victimization, extortion, kidnapping — climate change, and tyranny. It’s not just warfare that generates refugees; as social structures collapse, the vulnerable have little choice but escape.

Is America facing a border crisis? At the moment, yes. More properly, it is a crisis of of our own making, however, and our on-going policy response is making matters worse. As the United States places economic and political pressure on the governments and people of countries such  as Salvador, Honduras and Venezuela, the number of refugees keeps growing. The U.S. has embarked on yet another episode of treating the poor people of Central and South America as mere pawns, ignoring their plight, poverty, and powerlessness. And now, to make matters worse, refugees from those blighted countries are being denied asylum and proper humanitarian assistance.

When the events of this period of history are examined, they will record blatant cruelty and heartlessness on the part of the American government. A policy of separating children from parents will produce generations of human trauma and emotional costs. Crowding people into under-staffed and poorly equipped internment camps for interminable periods of time creates a breeding ground for resentment and crime.

Patterns of refugee movement are a global phenomenon. As the climate warms and agriculture fails vast numbers of people must relocate or perish. Where constant flooding happens, people have no choice but to move to higher ground. Though we traditionally associate the concept of refugees with warfare, that association needs to broaden to include climate and social collapse. The reality of our globalized predicaments require globalized solutions. The border problem we face is humanitarian, and our response to it will dictate the judgement of history.

The United States is not immune to global forces and our current policies are exacerbating an already terrible situation. To provide relief — housing, food and proper health care — to refugees at our border will cost far less than billions for a wall or bloated military budgets. Even one-million refugees represent only three-one-thousandths of a percent of U.S. population increase. One wonders what is really at play here since it’s obvious neither money nor population are the problem. The unfortunate answer is our history and promulgation of racism and bigotry.

The refugees at our southern border are brown-skinned people who speak Spanish, a reality that fits neatly into America’s racist inclinations. Despite the words emblazoned on the base of the Statue of Liberty welcoming “tired and poor” reality reveals that being “white” is also a major qualification. One cannot help but notice that our northern border with Canada is not at issue, though I suspect if brown-skinned Inuit people were seeking asylum from the U.S. in great numbers the very same race-based issues would arise.

The irony is that the refugees at the Mexican border by-and-large are decent, hard-working people, just the sort of people American needs. They are looking for safety for themselves and their families, and ask little more. Their escape is a matter of life and death, not greed. Xenophobia clouds our vision and risks the legacy of yet another moral failing.

One thought on “A border crisis?”