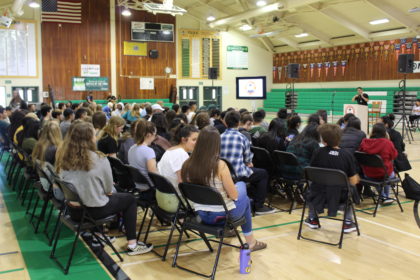 Sonoma Valley High School held its second annual Authors’ Day on May 3, with several writers, of varying backgrounds and perspectives, speaking to a school assembly.

One author who spoke was Alana Nichols, a Paralympic gold medalist in wheelchair basketball, who described how her injuries affected her life and how she established a new future for herself around it. Another speaker was Jose Antonio Vargas, who shared his experiences as an undocumented immigrant in the United States. Another presenter was former Poet Laureate of the United States, Billy Collins, who read multiple poems by himself and others.

Among these authors, one who left a particularly strong impression on many students was Anthony Ray Hinton, a man from Alabama who was wrongfully convicted of murdering two fast food managers in 1985. Hinton was then incarcerated for 30 years, serving 28 of those on death row, before the Supreme Court finally overturned his conviction. Last year, he published his memoir, The Sun Does Shine: How I Found Life and Freedom on Death Row. 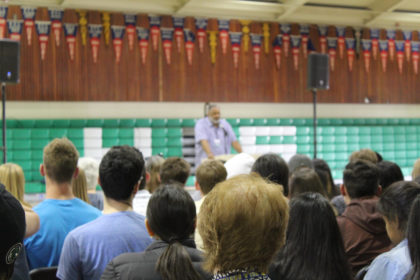 Hinton was visibly emotional during certain points of his presentation, as anyone would be if they lived through the same things he did. He described detectives explicitly telling him they did not care if he was guilty or not as they were charging him, even as they sentenced him to death. Once his boss presented the detectives with an alibi, complete with surveillance camera evidence, they dropped the charges of robbery, kidnapping, and attempted murder, and instead charged him with the two capital murder charges related to the two fast food managers.

Before delving into his full story, Hinton quoted the detectives speaking in public about his sentencing on the same day that it happened, using the same racial epithet that they used to describe him. He described not speaking for the first three years, writing down everything he wanted to say, and spending hours upon hours in solitary confinement.

A more light-hearted element of Hinton’s story was introduced when he began describing how he would escape his cell in his mind while his body was still trapped inside. He would involve himself in elaborate fantasies, such as having tea with Queen Elizabeth II, and marrying Halle Berry for 15 years, before divorcing her for Sandra Bullock.

A particularly interesting part of Hinton’s story was when he described befriending a Klansman, and the son of the local Ku Klux Klan chapter’s Grand Wizard, who was also on death row for a brutal, racially-motivated murder. He emphasized how simply showing the man love and compassion made him realize the error in the way he was raised, and the way he thought as a result, before he was ultimately executed.

Hinton also described his own involvement in his legal battle to prove his innocence to the state of Alabama, which sentenced him to death knowing full well he did not commit those crimes. He described firing esteemed lawyers who wanted him to tell the courts he was guilty, so that he could get his sentence reduced to life without parole. He mentioned that this was a promise he could not keep; he promised to his mother when he was 12 years old that he would always tell the truth. Eventually, after 30 long years behind bars, Hinton’s case was finally overturned.

Hinton rhetorically asked the entire gymnasium, “where is my justice?” He never received an apology from anybody in the Alabama justice system. He sued the state, but lost the case. However, he did emphasize his forgiveness for the state over how they treated him, stating that he did so simply to lift a burden off of his own shoulders.

Hinton’s story visibly struck a chord with many students in attendance. After he finished his speech, the closing presentation was from Alex Filippenko, an astrophysicist who spoke to the crowd about black holes, in light of the recent photographing of one. While Filippenko was presenting, the line for students who wanted Hinton to sign their copies of The Sun Does Shine stretched out so long that the last students in line walked away with signed books at almost the same time Filippenko’s presentation was finished.

Hinton’s presentation at this year’s Authors’ Day is only one example of how students at Sonoma Valley High School have found themselves informed or inspired by those speaking during the event. Based on how successful both Authors’ Days have been so far, it seems like the event is shaping up to become a Sonoma Valley High tradition for quite some time.

Dean Szanyi is a junior at Sonoma Valley High School