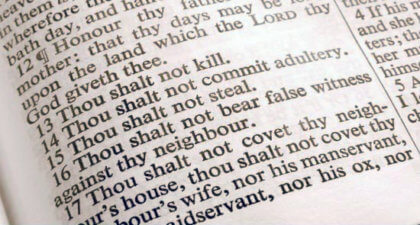 Whenever there is wealth and property, (and for the past 5,000 years when has there not been?), theft and corruption accompany it. Greek mythology prominently features Hermes’ theft of Apollo’s cattle, and virtually all major religions include prohibitions against theft. The Ten Commandments includes it on the list in various forms, Islam’s punishment of thievery is harsh, and Buddhists and Hindus believe thieves suffer rebirth as rats or jackals. And as for corruption, “Thou shalt not bear false witness” speaks to the corruption of truth through false testimony.

American law largely focuses upon property and the consequences of theft and corruption. By swearing to “tell the truth and nothing but the truth” a witness promises not to lie; perjury — lying under oath — is a punishable offense.

Despite laws, precepts and prohibitions, however, theft and corruption are not just likely to happen, they predictably do. Accordingly, wealth is protected through systems and methods of accountability designed to uncover attempts to gain it unlawfully from others. Nonetheless, credit card fraud, for example, the theft of private wealth, runs into the billions each year.

Public wealth is comprised of collective funds and property safeguarded by governmental or non-profit institutions. Public wealth is particularly vulnerable to theft and corruption, and in order to insure it is safeguarded, standards and regulations are imposed. Government and non-profits are constituted specifically for public benefit, and trustfulness is at the very heart of their ability to function. Nobody wants to think that anyone working in government or non-profits could in any way be dishonest, but unfortunately, that’s not the case.

It is precisely for these reasons that proper financial accounting and the arms-length services of outside auditors is required of government entities. The notion that “it can’t happen here” is naive and untrue; it can happen and does. Though most employees in government and non-profits are hardworking and honest, history teaches that vigilance and compliance with proper accounting procedures is essential. The amounts of money and material flowing through government is massive, and the temptation to steal it is massive as well. Unless processes and procedures to insure honest compliance are properly and consistently applied, the weakest links in the chain of public trust will be broken.

Betrayal of the public trust is so endemic that an entirely new legal category of employee was created, namely the “whistleblower.” Whistleblowers make public the secrets about theft,  corruption and dishonesty that organizations prefer to keep hidden and under wraps, and prior to the passage of laws to protect the jobs of whistleblowers, telling secrets was a risky endeavor. Even with “whistleblower protection” laws in place, workplace relationships, long-standing codes of silence and job vulnerability make speaking up too challenging for many. Seen as a betrayal, some people feel whistleblowing is akin to snitching, being “a rat.” Most workers feel it’s easier and safer to “keep your trap shut.”

An essential job of citizenship is to make sure government and institutions properly protect the publics’ wealth. This means paying attention, asking questions and speaking up publicly to draw attention to potential problems. It means accepting responsibility for keeping track of not just one’s own possessions, but public possessions as well: money, equipment and other assets.

It’s unfortunate that worrying about theft and corruption occupies much of our space and time; however, given the lure of temptation, worry we citizens must.

One thought on “Theft and corruption”