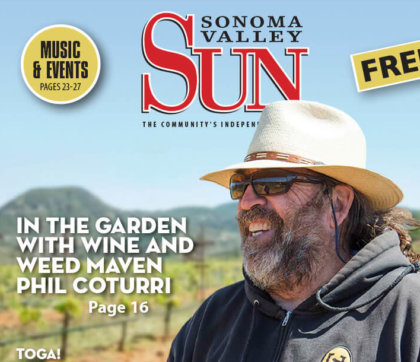 “I’m a dinosaur,” wine and weed maven Phil Coturri says at HopMonk Tavern in Sonoma on a day when the temperature hits 101. Coturri is talking to 50 or so members of the Sonoma Valley Cannabis Enthusiasts who have gathered in the back room to hear words of wisdom. He goes back and forth from weed to wine and wine to weed, but he gives the cannabis enthusiasts what they want to hear: stories culled from a lifetime of experience growing and smoking marijuana and loving the marijuana plant for itself. This is the real deal and the audience knows it. 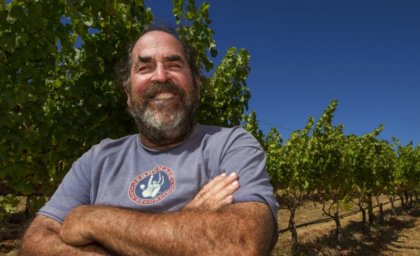 Indeed, it’s not every day that a marijuana grower shows up in public and talks about cultivating cannabis. In fact, it’s a very rare occasion. Phil Coturri is a poet and a Dead Head who grows grapes and makes wine for the marketplace. Winery Sixteen 600 is the name of his winery, which he co-owns with his sons, Sam and Max. He does not grow cannabis to sell. He’s an “amateur,” from the French which means a “lover of” something. The amateur, rather than the professional, was once considered the ideal balance between pure intent, open mind, and passion for a subject. That’s Coturri.

True to form, at HopMonk he enumerates the ways that he’s both an amateur and also a “dinosaur” in the world of weed. For starters, he calls it “pot,” though that’s not the politically correct term these days. “Cannabis” is, but Coturri doesn’t go there. He’s also a dinosaur in that he likes to smoke joints and doesn’t care for salves, edibles, and tinctures, though he’s also concerned about the health of his lungs and may have to change his delivery method.

Unlike many commercial growers these days, he starts with seeds, not clones, and cultivates his pot in sunlight not in a greenhouse. Coturri doesn’t aim for weight but for flavor, which is dependent, he says, on terroir, which is equally important for grapes as it is for wine. He wants pot plants with a high level of THC, much as he wants wine with a high level of alcohol. 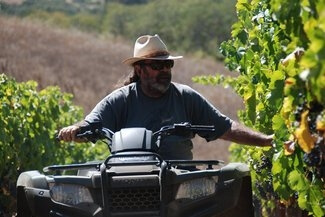 “All my adult life I’ve been growing intoxicants,” Coturri says. “I started smoking pot when I was 14, which was the same age that I started to work in vineyards. In those days, I couldn’t have gone around saying I’m ‘Phil Coturri and I smoke pot.’” Nor couldn’t he have said that he was a “guerrilla grower” and that he concealed his irrigation system. At least once, he tore up his plants because he didn’t want his sons to get the wrong idea about their dad. Not surprisingly they soon found out anyway. It’s hard to hide the smell.

“This is my mantra,” Coturri says and sips his iced tea. “When I think my pot crop is ripe, I don’t harvest. I wait another two weeks and then I harvest when the plants are at ultimate ripeness. I want sticky, sticky plants.”

Coturri operates nearly the same way in vineyards as he does with his pot crop. He’s organic everywhere. At times, he drops as much as 50% of the fruit that’s on the vine, much to the annoyance of some vineyard owners who disapprove of his style of management. 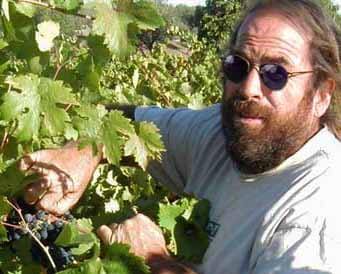 Fledgling pot growers took copious notes when Coturri talked about healthy soils, composting, cover crops, and mites, which can be a big problem. “Early in the season, my pot plants grow side-by side with sunflowers and marigolds, and birds and bees are flying around,” he says. “After a while, I cut down the sunflowers so the buds are in full sunlight. I like fish emulsion in the vineyard and also in the garden where it encourages bloom and improves flavor.”

Coturri began to come out of the cannabis closet a couple of years ago. As a result of going public, he lost some clients and gained others.

It’s not just the smoking of pot that gives Coturri pleasure. Spending time in his garden with his plants is like being in an earthly paradise. “My garden is a refuge from the world,” he says. “Being there is therapeutic.” If that doesn’t sound like a dinosaur I don’t know what does. It’s back to the future with Phil Coturri.

A young marijuana grower in the audience explains that he will soon be a father. He wants to know at what age it will be okay to smoke in front of his child. “Don’t hide it,” Coturri says. “I drank wine with my grandfather when I was a boy. We all learn about intoxicants from the time we’re born.”