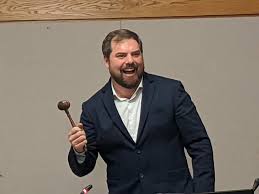 I understand you’re 32 years old, Logan. Are you the youngest council member in Sonoma history?

And you grew up in Sonoma?

Yeah, I went to Sassarini and then Altimira; from there I went to the JC and on to San Francisco State where I received a degree in English education. I planned to become a teacher. I ended up teaching English in South Korea for three years after graduating.

How did you end up in South Korea?

I applied for positions in 2012, and was offered jobs in Indonesia, Japan, and South Korea. I knew the least about South Korea and their pay was the highest, so that’s the job I accepted. I taught in two historic cities, Gonju with about 200,000 population, where I taught in an elementary school situated in a rice paddy; and Chinju, a bigger city of 400,000 people where I taught freshmen and juniors in Chinju National University.

Did you enjoy your time in South Korea?

It’s a fantastic country, really a first-world country. Incredibly great public transportation and ease of mobility and a population with huge national spirit. South Koreans are very focused on education, to the point of being highly stressful. Some students are at school from 7am until 1am.

Did you worry about North Korea?

At first I was nervous, but over time I learned that North Korea is like living next door to a really mean dog, but then you find out it only barks, not bites. Kim Jong Un is all about money. The younger South Koreans don’t want to unify with the North; the older ones still think of the North Koreans as their cousins. 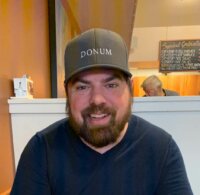 So you returned to Sonoma.

Yeah, my parents still live here, in the same house I grew up in with my sister.

Since you were elected the Sonoma City Council’s been busy.

Increasing the minimum wage was a tough issue, tough push. But I believe it goes hand-in-glove with affordable housing. Businesses will adjust, I believe, to our minimum wage being fifty cents higher than the state’s minimum wage. If businesses don’t take care of their employees the ordinary taxpayer will; big corporations don’t pay their fair share and that’s why we need to support small business. Markets are fantastic at providing consumer benefits but fail at providing basic human needs. It’s important to distinguish between needs and wants.

And what’s on your plate for this year?

We have a major focus on revising our Development Code. The state has taken away a lot of local control with overreach on housing. We need to perform some regulatory Jujitsu to ensure that new housing is what we need and doesn’t fundamentally change the way Sonoma looks and feels. I think we have a smart Planning Director and a great Planning Commission.

You have a full time job, too?

Yes, I work at Sonoma-Marin Recology as a zero waste specialist. My focus is educating about California’s waste laws, and on removing compostable food waste, that produces methane, from ending up in our landfill site, which has only 21 years left before it’s at capacity. I recently worked with the Flamingo Hotel to divert the six cubic yards of food waste they produce each week to composting instead of the land fill. Most solid waste scraps are recoverable. It’s a matter of education and promoting the use of resusables. Recycling is still effective; Indonesia, Vietnam, and China all accept material.

Yeah, balancing being Mayor, a full-time job, and marriage is challenging. I’ve been married for one year, but we’ve been together for thirteen. Personally, I’m feeling optimistic these days, despite all the challenges. I believe that government can provide good things for people.