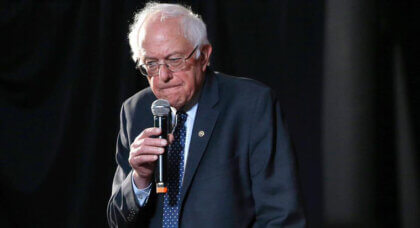 Super Tuesday appears to have provided the likely answer to the question of who will be the Democratic Party’s candidate for President this November, and it ain’t Bernie Sanders. Despite his win in California, the combined votes for Biden and Bloomberg in this state outweighs Sanders’ and indicates that even liberal California is not ready to make systemic changes.

Sanders’ political thrust is grounded in the core belief that unless systemic change is made in world culture, America and much of the rest of human society is doomed. He has accepted the same conclusions as climate activist Greta Thunberg: we are denying what science tells us about global warming and we are quickly running out of time. Only a massive transition to a fossil-free world and the sacrifices necessary to accomplish it provides any hope of avoiding the worst effects of global warming.

When it comes to economics, Bernie’s pushed for policies that reduce the unprecedented accumulation of wealth into a small number of hands, knowing history teaches such inequality leads to social chaos. The wealth at the top is mirrored by extreme poverty at the bottom; the erosion of an ethical social safety net over the past 40 years has led to homelessness, bankruptcies, and the largest prison population in the world. Only a radical shift in economic and tax policy can prevent the damaging repetition of capitalism’s boom-and-bust cycles.

His push for universal health care is in recognition that virus and bacterial illness does not recognize borders, economic class or political philosophy; unless America develops a robust, inexpensive and universally-available health system, it will be increasingly vulnerable to diseases like Corona virus. Sanders looks at the modern world and is dumbfounded to find America standing alone when it comes to offering universal health care. Medicare is a single-payer healthcare insurance system, and effectively and efficiently serves many millions of Americans; its gradual extension to everyone is not rocket science.

Culturally, America’s history of racism and bigotry continues to deeply influence matters of justice, economic opportunity, and health. Although progress towards the emancipation of women, members of ethnic communities, and gender-based identity has been made, it’s taken place against a backdrop of systemic discrimination. Bernie speaks of a multi-cultural coalition precisely because that’s America in the 21st Century.

All these initiatives require courage and sacrifice, but people don’t like to give up what they’ve got. Our profligate consumer habits — wasteful and indulgent — are hard to break and each of us is complicit in propagating an economic system that is killing the planet. Like Greta, Bernie can’t accept standing by and watching it all come crashing down while opportunities exist to prevent disaster, but it appears the American voter does not adequately share his sense of purpose.

In the frightening Trump era, return to the previous status quo seems good enough for most people, even though that status quo hastens the collapse of civilization. Relief from the stress, anxiety and tension of our present political situation is akin to how it feels to stop banging one’s head against the wall; life may not get better, but at least some of the pain goes away. Unfortunately, all this head banging has left us stunned and unable to make rational decisions. Everyone hopes Joe Biden will make the pain go away, but unfortunately, he’s just a band aid, not a cure.