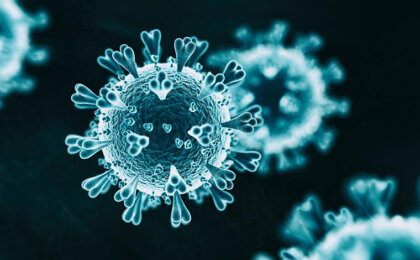 Although we cannot directly sense it, our own bodies inhabit both worlds, and among the smallest living things we carry around within us are viruses. Except for the rare macro- and mega-viruses, viruses are so tiny that tens of millions of them can fit on the head of a pin. And viruses are, as best as science can tell us, as ancient as life on earth itself.

There are no virus fossils to examine, but examination of viruses frozen for tens of thousands of years show them to be essentially the same in structure as the viruses we know of today. To call them living is to accept that viruses comprise a family of creatures which require residence in a host in order to thrive and reproduce. Lacking a host, a virus cannot replicate itself.

It may well be that viruses are one of the earliest forms of life. Consisting of protein, as do all living things on earth, a virus contains RNA or DNA consisting of only a few genes, as few as eight, as compared with human DNA, which contains upward of 25,000 genes. These simple genes are contained within their own protein shell within the virus, and the rest of the virus is encased by an outer shell of protein. When a virus contacts a vulnerable host, it attaches itself to a single living cell and transfers its RNA or DNA into it; co-opting the cell, the virus’ genetic material turns the cell into a virus reproduction factory, producing so many progeny – as many as 10,000 – that the cell literally explodes, sending the reproduced viruses off to infect other cells. Genetically less stable, single-strand RNA-filled species of Corona-type viruses like influenza are also prone to mutation, which is why flu vaccines must be updated each year.

Most viruses are eliminated by the body’s immune system defenses, but some, like influenza and Covid-19, can overwhelm bodies suffering from lowered immunity or illness. Nature is nothing if not merciless; viruses play an essential role in preventing many species of plants and animals from over-populating an ecological niche, by culling the most vulnerable members of the species. For example, a specific type of virus called a bacteriophage is specialized to infect and kill bacteria only, and is responsible for ending phenomena such as water-borne “blooms” of toxic red tides and blue-green algae.

The war of the worlds has been going on for millions, perhaps billions of years. The smallest living things among us have their own agenda, and exercise it within the continuity of a highly dynamic, self-regulating, globalized living system in which humanity is both an active participant and passive observer.

In light of this, in 1898 writer H.G. Wells concluded his novel, War of the Worlds appropriately; lacking an effective immune system response, Martian invaders of earth are “…slain, after all man’s devices had failed, by the humblest things that God, in his wisdom, has put upon this earth,” warriors from the world of the small.