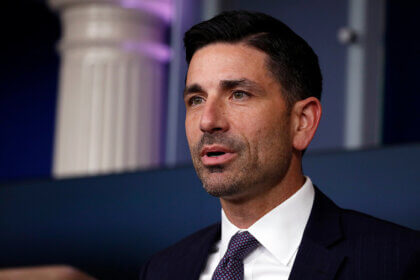 I happened upon an interview the other day between Chuck Todd and Chad Wolf on NBC’s Meet the Press. Wolf is the Acting Secretary of the Department of Homeland Security, although even that job designation is in question now that an ethics committee has found that his appointment by Donald Trump may not even be legal. That aside, the interview was long enough for one to watch Wolf’s mind at work and to take the measure “of the hairs on his chinny-chin-chin.”

Wolf’s smooth and sharp, I’d even say cunning, which I guess are good characteristics for any wolf to have, and certainly fits the wolfish archetype. He had no problem parrying Todd’s thrusts and effectively kept his cool even when sharply challenged. To Todd’s credit, he showed no fear of Wolf while displaying appropriate decorum towards a cabinet secretary.

At one point Todd, after noting African Americans make up 14% of the U.S. population but account for 28% of fatalities at the hands of police, asked Wolf straight out if he believed that American law enforcement suffers from systemic racism. Wolf’s response was agile; “No,” he replied. Wolf went on to say that within particular police departments there certainly were individuals who were racist, and that’s a problem that needs to be addressed, but he does not believe that systemic racism exists.

This exchange prompted me to think about systemic racism and how it is defined. A simple definition is a system in which race is explicitly considered a criteria within written rules and procedures, for example, a police department that explicitly excludes hiring or promoting people of a certain race. This definition can be expanded to include unwritten rules and procedures that implicitly limit opportunity by race. Expanded yet further, the definition includes a situation where a majority of members of a police department are racist, and support each other in adopting racist behaviors. Either individually or as an expanded definition, these represent the reality of systemic racism.

Wolf appears to have based his answer on the simplest and most narrow definition of systemic racism, racism allowed by law. Of all the criteria he needs to meet, this is the easiest; legal exclusion by race in hiring or advancement is prohibited by federal law. Wolf made his case on purely technical grounds; this allowed him to avoid the implications of Todd’s death-at-the-hands of the police statistics, and revert to the ever-handy “bad apples” argument. Todd’s mistake was to not follow-up on Wolf’s defense and press harder on implications of the statistical inequity; to fail to ask Wolf about how many “bad apples” it takes in a police department to “spoil the whole barrel;” how many spoiled barrels there are in American law enforcement and when does that rise to the level of “systemic racism?”

On Meet the Press, Todd’s simultaneously trying to conduct a serious interview while remaining engaging and entertaining to his television audience: he’s literally performing his job. As interviewers go, Todd’s okay, but lacks gravitas; he’s Chuck, not Charles Todd, after all. In fairness, Wolf never planned to open himself up to Todd and show any vulnerability, so his interview was a public relations stunt, not a serious examination of DHS or the conduct of his job.

But Wolf was on display, and it’s precisely his sort of cunning intelligence that backs up Donald Trump and makes our situation so scary.

One thought on “I’m afraid of the big bad wolf”