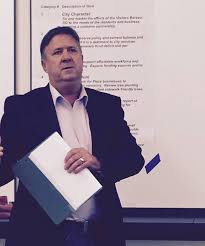 Former Sonoma City Councilmember David Cook was sentenced today to six years in state prison for committing “lewd and lascivious” acts with a child under the age of 14 years.

Cook, 55, plead “no contest” in April to the felony charge. He had been out on bail, but was taken immediately into custody for processing.

An investigation conducted in 2020 by the Sonoma County Sheriff’s Department was prompted by an 11-year-old child disclosing to a trusted adult that Cook had recently molested her. At the sentencing hearing the young victim spoke to the court, detailing the negative effects Cook’s actions had brought to her life.

The victim’s father and stepmother also addressed the court to describe the lingering impact the abuse has caused the victim, and to request the court impose a prison sentence rather than a suspended prison sentence or probation.

The Sonoma County District Attorney’s Office also argued for the court to impose a prison sentence. After the court noted that, “[Cook] never said he was sorry. Not once,” the court imposed the 6-year term.

Cook faced up to eight years. Due to recent sentencing revisions enacted by the California Department of Corrections and Rehabilitation which allow inmates serving sentences for “violent felonies” to earn additional credits, it is anticipated Cook will be released on parole after serving 4 years of his sentence.

In addition, he will be required to register as a sex offender upon his release from prison.