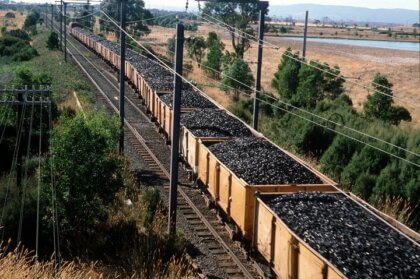 Unidentified coal companies appear to be behind a new backdoor effort to acquire the North Coast Railroad Authority’s right-of-way between Eureka and Willits and rehabilitate the defunct railroad, all so they can export coal to Asian markets via the Port of Humboldt Bay.

State Senator Mike McGuire calls this development “one of the largest environmental threats to hit the North Coast in decades.”

On Aug. 16, a mysterious, newly formed corporation called North Coast Railroad Company, LLC, filed a pleading with the Surface Transportation Board. Ostensibly a proposal to submit an “Offer of Financial Assistance” to rebuild the line, the filing makes a number of surprising claims.

For one, the 14-page filing, submitted by a pair of Chicago attorneys, says NCRCo. is “capitalized to the tune of $1.2 billion” and has “thoroughly-developed plans” to acquire and rehabilitate the dilapidated rail line between Humboldt Bay and Willits. Once complete, the company says, this newly reconstructed railroad will move “high-volume shipments” between the San Francisco Bay Area and Humboldt Bay.

The document does not disclose what these “high-volume shipments” might contain. Nor does it identify anyone involved with the corporation. Read the full story in the Lost Coast Outpost