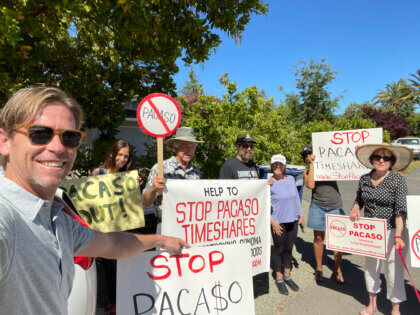 Since Pacaso launched last October, the company has burst onto the scene like a raging ball of flames. Within months, it claimed to have reached so-called “unicorn” status—meaning it had been valued at $1 billion—quicker than any other company ever. (Critics contend the billion figure represents a line of credit rather than true assets and revenue).

Over that same period, though, Pacaso has also racked up an impressive number of opponents: mayors who say the company will ruin communities, neighbors who say it will worsen the housing crisis, and entire cities that say Pacaso is running illegal operations.

Day, 42, discovered that a tech startup had purchased the home across the street from him on Old Winery Court, across the county line to the east of Sonoma, he and the other neighbors gathered to have an emergency meeting. Soon after, they sprang into action, creating anti-Pacaso signs, writing op-eds in the local paper, and talking to members of the city council. They formed an organization, too: “Sonomans Together Opposing Pacaso,” or STOP.

Like others in Sonoma and elsewhere, Day fears that the entrance of a company like Pacaso into areas zoned for single families will mean less real estate for potential full-time residents.

Brad Day’s letter to The Sun.