A life of food and cooking 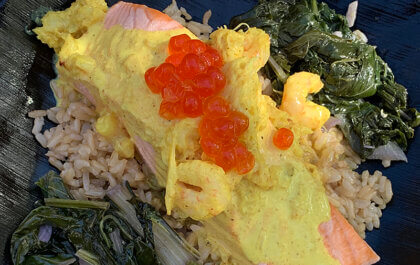 My mother was a fantastic cook. Once during a visit to our home, she felt the need to get into the kitchen, but the fridge was mostly bare except for some lemons. For her, that was enough. When life delivered lemons, she made lemon sauce.

I grew up standing by the stove watching mom cook. When I was about eight years old, she ordered a Wolf Range restaurant stove, a culinary workhorse so large and heavy that new supporting posts had to be installed in our basement crawlspace below. With eight burners, a large cook-top over a broiler and two massive ovens, that stove and my mother delivered a constant stream of incredible meals. I’d ask questions, but her answers were vague except when it came to how to treat and use kitchen utensils, pot and pans. My mother was not recipe dependent and when I’d ask how long something should cook, she’d say things like “till it’s done.”

I started cooking breakfast for my brother and sister on the weekends; my mother would sleep late and yet another bowl of Cheerios or Shredded Wheat was boring. I’d cook eggs and bacon while my brother and sister popped slices of bread in the toaster. I kept hanging around the kitchen and cooking until I left home at eighteen. By then I’d watched mom make saffron risotto, roasts of all kinds, poached seafoods, side dishes of okra, squash, peas, cabbage, carrots, etc., fresh salads and salad dressings, and amazing gravies and sauces. She’d grind meat using a hand-cranked meat grinder, and Parmesan cheese for pasta never came out of a container.

When I was out on my own and had my own kitchen, cooking everyday felt normal, and it still does. Having a wife and family meant making meals for us all, and despite the absence of an industrial-strength Wolf Range, I cranked out something different every day. On Sunday mornings I’d make pancakes, experimenting on the kids with various recipes. Omelets and sausages and French Toast and fresh bread were regular fare. Dinners were a time to play with international cuisine; the kids called my Indian dishes “yucky” but they ate them. I’m still using the same Wok I bought 50 years ago to make Chinese food.

For thirteen years my wife and I owned a Bed and Breakfast and would cook each morning for a dozen people. Having a steady stream of strangers to satisfy fed my inventiveness; as a cook there’s nothing better than getting “OOOhs” and “Ahhhs” when a plate is set before a stranger.

When I think about how many meals I’ve cooked the number gets kind’a scary; call it an average of five meals a week for 50 years and it adds up to well more than twelve thousand. In this Instagram age, I guess should have taken a photo of each of them.

Now I’m just cooking for two, and we old folks are not very big eaters. Eating leftovers has taken the place of half of what I used to cook. I go to the farmers market each week to buy fresh produce and organic food, and I still enjoy being in the kitchen. Right now, quinces are in season, so I’m making quince/apple sauce until the fruit is no longer available. What’s next depends upon, as my mother would say, “what looks good.”