Posted on December 6, 2021 by Josette Brose-Eichar 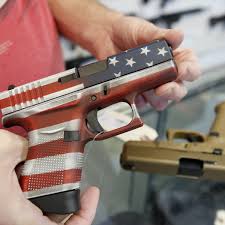 From a very young age I knew guns kill. That is the purpose of a gun, to kill animals or other humans. A 17-year-old brings a gun to a protest, kills two people, and is acquitted on all counts. The verdict was that it was self-defense. If you bring a gun, then you must know that if you use it, you most likely will kill another being.

The US Supreme Court is now looking at repealing New York’s law regulating carrying concealed weapons. This will influence other states, like California, with similar laws. According to those supporting this, it is a constitutional right and concealed weapons are needed for self-defense.

When is it self-defense to pull out a gun and shoot another living being? Is it when someone shoves you in a rude manner? Is it when a dog growls at you? For me the most frightening thing is that one day I can be in a supermarket or other public place and not know if I am surrounded by a bunch of people toting guns.

In Minnesota my father would disappear for weeks at a time during various hunting seasons.  Our house was full of guns for every type of killing. When he returned from these trips, I would look at the purpose of these guns, death. A deer would be laying, gutted, and I would look at the creature’s lifeless eyes. Ducks, geese, pheasants, wild turkeys, or grouse would lie in a heap with their lifeless heads flopping over one another. The deer would be carted off to a butcher. I would help my mother clean the lifeless birds. The kill would be wrapped and put in the big freezer in the basement. I would help my mother in the kitchen as she created her wild game recipes. I knew something was wrong, yet as a child I was not sure what to do about it.

I was lucky to land a high paying job as a union supermarket cashier when I was in college.  With my part time wages, I out-earned my father and was able to live on my own. One day at work I overheard two of the teenaged bag boys bragging about how they were breaking into homes and robbing them. I told them both that they should beware. One day they could break into a home owned by someone like my father, and he would shoot them. They told me they had not thought of that.

One night, just before closing as I was ringing up the last customer, I felt an arm around my neck, and pressure at the side of my head. I thought it was one of the bag boys trying to cop a feel. But, no; I turned and was face to face with a man in a ski mask and he had a gun to my head. I knew what guns can do. I proceeded carefully as he dragged me from cash register to cash register.

Strangely, I did not become a vegetarian until I was in my early 40s. Sometimes I wonder what took me so long. Life has taught me, guns have only one purpose, to kill, and our society’s unwillingness to face that fact dooms us to living in a violent and fearful state.

4 thoughts on “What guns do”