Traveling at the speed of faith 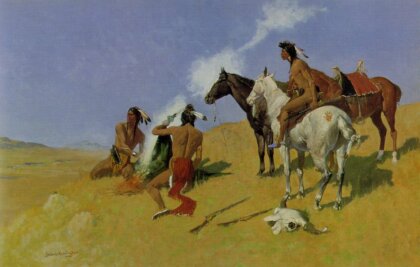 Ideas propel human society, imagination providing an inexhaustible source of fuel. Boundless in reach, ideas cross borders and influence cultures through networks of communication. Originally networks of communication traveled at the speed of direct transmission, sensory experiences such as touch, physical gesture, the spoken word, and the use of smoke, symbol and drum.

Secondary transmission arose with the written word, the technologies of clay tablets, scrolls, paper, printing press, books and newspapers. Their use was restricted to those with the ability to read and write, and as Harold Innis points out in his book The Bias of Communication, promoted the formation of monopolies of knowledge, accompanied by the power that such knowledge confers. The Roman Empire’s use of written scrolls for communication was an essential tool of its power.

With the advent of electronic communication, ideas suddenly moved at near light speed; telegraph, telephone, radio, television and today’s digital networks have all accelerated the pace at which ideas travel. Although the technology is widely available, efforts to monopolize information and create barriers continue. Various attempts are made to break through information barriers, such as Wikipedia, that provides information uncontrolled by commercial or political interests, or Wikileaks, through which whistleblowers attempt to break through governmental monopolies of knowledge and power.

Ideas are metaphysical, which is to say they exist in the space of human imagination. The entirety of the objects of civilization have their original basis in this imaginary space, but manifest as the major components of contemporary human experience. We live in homes that were once just ideas; the same is true for all the physical objects humanity has created. From the human imagination an entirely new world reality has been created, one that in many ways subordinates the world of nature.

Our reliance on ideas frees and entraps us. It’s no longer possible to escape the result of our metaphysical reality and our freedom must be found within its bounds. We are free to shop, free to watch movies, free to drive a car, etc. The freedom of what to believe, however, remains in contention. Attempts at creating monopolies of knowledge and power absorb vast resources and attention. Controlling the content and spread of ideas is an obsession among those with power over networks of communication, resulting in an ongoing propaganda war over faith in who and what people will rely upon.

Truth has always been subject to faith, faith in the source of information. The current efforts at propagating disinformation – about politics, vaccinations, and science – intends to undermine faith. This is the intention of all monopolies of power, to undermine particular sources of faith and replace them. In this way, we are forced to choose which voices and facts to trust and which to reject, an uncertain process at best.

Our world travels at the speed of faith, fueling conspiracy theories, civil unrest, political upheaval, economic policy, religious conflict, military adventure – the entire plethora of our metaphysical reality. It has always been this way. Imagination provides the basis for all our hopes and fears.

Escaping our metaphysical world, even for a little while, requires going back to sources of direct transmission, reliance on faith in the natural world. Feeling cool air fill your lungs, tasting the tart slice of an apple, soaking in a hot bath; in short, finding faith, comfort, and truth in being instead of thinking.