The Dec. 10 issue of The Nation features a penetrating article by Tom Gogola, an award-winning journalist and former congressional district staffer here in Sonoma County. The piece, entitled “Systemic Sadism in the Sonoma County Sheriff’s Office,” refers to “3 Seconds in October – the Shooting of Andy Lopez,” a powerful documentary by Petaluma’s Ron Rogers who revealed new details about the tragically unnecessary death of 13-year-old Andy Lopez, who was shot dead by deputy Erick Gelhaus.

The film has screened several times on local PBS stations and is scheduled for its national debut on PBS on January 22..

The documentary also “unflinchingly” digs into the “systemic racism in the SCSO” and “reinforces the view that the force has a problem with equal-opportunity systemic sadism in its ranks,” according to Gogola’s article. Most Sonoma County residents are aware of the “yard counseling” torture forced on jail inmates, the shooting deaths of several individuals such as Jeremiah Chass, a 16-year-old who was experiencing a psychotic break and was killed by deputies who riddled his body with seven shots, and Glenn Swindell, a mentally ill man who was holed up in his attic and killed himself after the Sheriff’s SWAT team lobbed round after round of chemical agents into the attic and then battered through a wall in the house in what was called a “full scale military assault.” Officer Mark Essick was in charge of that operation. 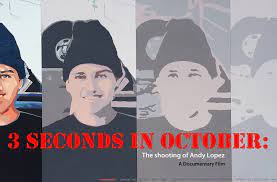 Other notable tragedies in what The Nation story refers to as the “post-Lopez parade of savagery and torture” are the horrific cases of a man who was under arrest for a DUI and tasered 23 times in less than 30 minutes and the 2019 head-bashing, tasering and carotid hold death of David Ward by Deputy Charlie Blount, all captured in video recordings. Of all these cases Blount is the only officer to face charges; his trial is ongoing now.

This SCSO is also responsible for an excessive number of deaths in custody, now up to 12, the highest number of such deaths in the Bay Area. Among the others, a mentally incompetent suicidal inmate in the jail’s mental health unit was returned to that unit after being hospitalized for swallowing various inedible things such as a cardboard milk container and cellophane. He was given a sandwich, left alone, unobserved and subsequently found to have suffocated himself by stuffing the sandwich down his windpipe.

“He appears to have died after eating a sandwich,” Sheriff’s Office spokesman Sgt. Spencer Crum said. While ignoring the extreme negligence that led to this man’s death, Crum added, “We extend our condolences to his family and friends.” [*note: see sidebar]

A new federal lawsuit against the Sheriff has just been filed in the October 2020 death of a young female in custody, Amber Marcotte, who was found dead in her cell. According to the coroner’s report, the cause of death was “acute fentanyl intoxication.” At the time, the jail was closed to all visitors because of the Covid pandemic. Therefore, the source of the drug “could only have come from a Sonoma County employee or contractor,” states the lawsuit. The suit goes on to charge that the Sheriff and County were “knowingly providing insufficient security and drug interdiction measures at the jail, thus placing inmates in danger.” 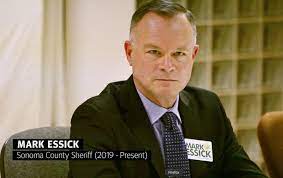 The Sheriff’s Office declared the case to be “without merit.” Attorneys for the family countered by pointing out that incoming inmates “are supposed to be searched thoroughly and comprehensively before they get to their cell. It’s clear to us that there’s a failure somewhere in the obligation to keep drugs out of jail and we’re very disappointed in the county’s flippant response that ‘it wasn’t us, it was an inmate.’” They also stressed the pressing need for an independent investigation of the case. “You shouldn’t be investigating yourself — that’s the essence of lawlessness.”

It must be noted that Asst. Sheriff Eddie Engram has been in charge of running the jail since the summer of 2020; prior to that he was responsible for directing internal investigations of matters just like this one. Reports from the Independent Office of Law Enforcement Review and Outreach (IOLERO) fault the inadequacy of the Sheriff’s internal investigations as well as notably deficient jail management.

Over the past 20 years, settlement costs in payouts for the Sheriff’s excessive force and wrongful death cases have added up to a shocking $20 million. After careful analysis of the past decade, the Press Democrat concluded that it was no surprise when in September 2020 the Sheriff’s liability insurance premiums skyrocketed from $3.2 million a year to $5.9 million, a 46% hike, the highest rate among all nine counties in the Bay Area. The county paid out $6.6 million in settlements in 2019 alone.

In October 2021, candidate for Sheriff Eddie Engram attempted to gloss over the facts by denying that the Sheriff’s Office stands out for its excessive force, malfeasance and the resultant insurance increases that followed. “I don’t think there’s a systemic issue in the Sheriff’s office,” he said.” Engram acknowledged that the liability insurance premiums had spiked but tried to dismiss it on the false premise that “that’s not something that’s specific to the County, that’s something that’s industry-wide when you talk about public safety.” Engram has been endorsed for Sheriff both by Mark Essick and the Deputy Sheriff’s Association.

Attorney Izaak Schwaiger, who has successfully handled many cases against law enforcement, has long pointed out the serious deficiencies in the Sheriff’s Office. “I’ve sued a lot of police departments,” Schwaiger said. “(Here) they not only refuse to admit liability, they refuse to do anything at all to change. There’s this machismo that dominates their assessment of risk.” He adds that the Sheriff’s “recklessness” drains sorely needed funds away from any number of beneficial efforts such as intervention programs for youth and mobile support teams for mental health calls. “If you have bad actors ‒ and this Sheriff’s department is a bad actor ‒ you want to see affirmative, proactive efforts to get better,” he said. “We have the exact opposite thing happening with this department.” 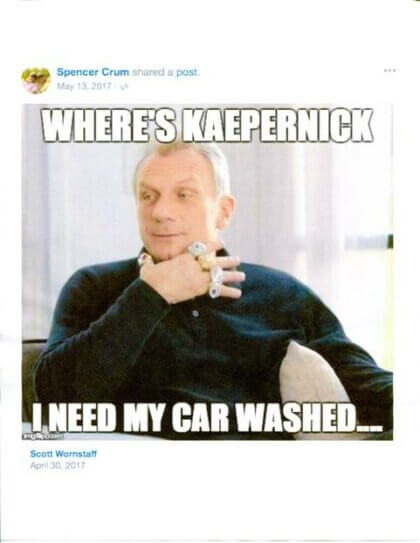 Sidebar: OLERO directors have consistently cited the Sheriff’s Office for a culture that celebrates white supremacy and extremism demonstrably seen in the excessive force and harassment meted out to people of color. The most recent report echoes those of the past: The Sheriff’s Office should “consider adopting a policy disavowing white supremacy and extremism and prohibiting employee speech and association that promotes racist or extremist ideology.” For example, Sgt. Spencer Crum, now retired but still employed in that Office as an Extra Help hire, was found to have posted racial slurs on his Facebook page. One was an image of Joe Montana in which the caption read, “Where’s Kaepernick? I need my car washed.” It does not appear that Sheriff Essick has ever disciplined Sgt. Crum for his blatant racism.

One thought on “Explosive charges of systemic racism, brutality in the Sonoma County Sheriff’s Office”