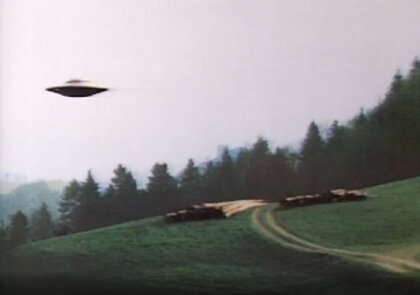 I loved science fiction movies and books as a kid; I still do, although I don’t read much sci-fi these days. In 1958, at camp Androscoggin in Maine, Earth vs. Flying Saucers was shown one movie night, and visions of a disabled saucer crashing into the Washington Monument stayed with me for years. The original version of H. G. Welles’ War of the Worlds (starring Gene Barry, of Bat Masterson fame), featured saucer-like crafts that hovered on magnetic fields and used weapons that disintegrated matter; It’s still a cool movie to watch.

Flying saucers and invaders from space are still popular fare, such as Tim Burton’s twisted Mars Attacks, half comedy, half satire, but full-out UFO fun. And then there was Spielberg’s Cowboys v. Aliens, one of the strangest motif mashups in recent film history. The list goes on, but of more interest to me recently has been the outpouring of UFO material on Facebook and online.

Of particular note are the photos and accounts of UFO encounters by a Swiss gentleman named Billy Meier. His accounts and images were published in a book in the 1990s and are now considered by UFO aficionados as some of the most compelling evidence that UFOs exist, visit earth, and interact with people. Add to this the videos shot by ordinary people using their smart phone cameras, footage recently released by pilots, and the comments of what appear to be highly sincere people in and out of government, and we’re in the middle of a UFO/travelers from space fixation rivaled only by that of the 1950s.

Of course, the other fixation of the 1950s was the threat of nuclear war. Once the Commies got the H-bomb the anxiety of Americans went through the roof. My childhood friend Jimmy Hindels told me his father was building a bomb shelter; “duck and cover” exercises at school fueled plenty of worry. The convergence of atomic weapons and science fiction was a natural. Ray Milland starred in The Man with the X-ray Eyes. A town was destroyed by the low budget The 50-foot Tall Woman. And aliens came to earth looking for help as their planet was destroyed by atomic warfare in This Island Earth. Godzilla, still a headliner in movies today, was notoriously awakened by atomic testing.

When the going gets tough, people go supernatural, and at some time and another, the going always gets tough; be it weather, locusts, earthquakes, volcanoes, or floods, blaming other-worldly forces asserts itself. This far easier than either admitting that “shit happens” or that we ourselves are to blame for our misfortune; such are the imperatives of stress, a reversion to our penchant for mythology, or shall I say ufology.

It’s no coincidence that Sci-fi is and UFOs are all the rage right now; between climate change, extreme weather, a deadly viral pandemic, political instability, and brutal warfare, now’s the prime time for visitors from space to intervene in human affairs, like Michael Renne, star of The Day the Earth Stood Still, attempted to stem the tide of human violence and the threat of a nuclear apocalypse.

That threat, annihilation at our own hands, has been the Sword of Damocles hanging over humanity’s head for my entire lifetime and that of all generations since 1945. Just like every civilization that’s come before, in hope and desperation, for salvation or damnation, we turn to the stars.