The age of innocence 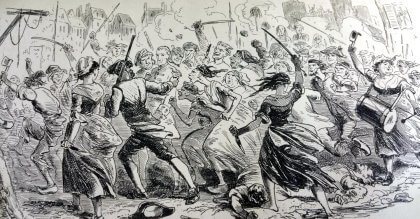 Between awareness of climate change, an Internet filled with disturbing images, cultural shifts about identity, and extreme political division, things seem terribly complicated and difficult right now. It’s tempting for those of us born in the 1940s or 50s to feel that life was once simpler and more innocent, that there really was a “Leave it to Beaver” or “Lassie” world, one more carefree and less complicated than the world we live in today; but it’s not true.

Such feelings are a matter of perspective. Life was not innocent for black Americans in 1952 living in Birmingham, Alabama, for example, nor innocent for most ethnic minorities, ever. For the Palestinians of the Middle East, life has not been innocent for three-quarters of a century. For the desperately poor everywhere, never. You get the idea.

For the lucky ones among us, the age of innocence meant a childhood untroubled by violence, drug addiction, hunger, or polio. In other words, good fortune. While living in safe neighborhoods untroubled by industrial pollution and crime, innocence was a luxury we enjoyed through chance alone and/or the benefits of accumulated privilege. My immigrant grandfather grew up in harsh poverty in Manhattan’s lower east side, living in a basement tenement with damp, moldy walls, but he later provided my father with a comfortable home in Brooklyn. My father, in turn, housed our family in New York’s suburbs, where I enjoyed an age of innocence: loved, safe, healthy, and well-fed.

Much of what we imagine as an age of innocence is just that, imaginary. My father loved to entertain us with tales of being a boy in Brooklyn, which, despite the street fights, petty larceny, and burlesque houses, sounded innocent as all-get-out. Upon reflection, I feel the greatest innocence he enjoyed as a boy was that world-destroying nuclear weapons had not yet been created or used. By recalling only the joys and freedom of the past, imagining an age of innocence is that much easier.

As Graeber and Wengrow make clear in their book, The Dawn of Everything, envisioning the past through a veil of innocence feels good, but is dangerously deceptive. By embracing the romance of “noble savages” living carefree lives in harmony with nature, or envisioning hardy, deeply moral colonists’ intent upon building a city on a hill, we gloss over the gritty reality of human life in all its complexity. Whatever human life has been, it has never been innocent. Our greed, aggression and ignorance have assured that. The modern idea of human progress itself may be a delusion.

Trump’s obsession with “making America great again” is dangerous, but so is Biden calling America “the greatest country the world has ever known.” Although coming from opposite sides of the political coin, both views propagate nationalistic, age of innocence abstractions about who we are and what we’ve been, as if either narrative is real, which they’re not.

An age of innocence? Sorry, never was.

Read more from Larry at www.BarnettWeekly.com