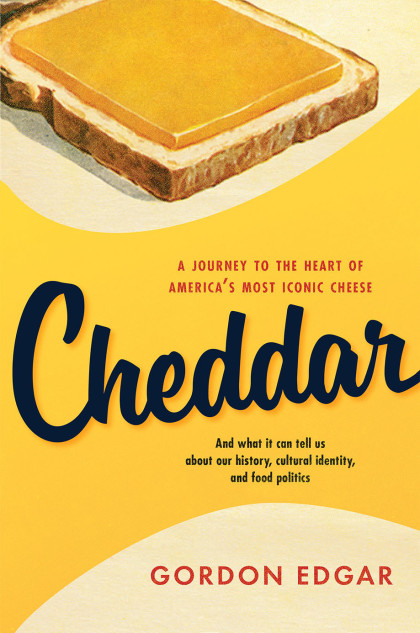 Cheddar cheese is synonymous with American cuisine, whether it’s a gooey cheeseburger from a fast food joint or a slice of Kraft on a grilled cheese sandwich served that your mom served with tomato soup used on cold winter nights.

Cheesemonger Gordon Edgar takes readers on “a journey to the heart of America’s most iconic cheese.”

Edgar, longtime cheese buyer for San Francisco’s famed Rainbow Grocery Cooperative, became obsessed with the iconic cheese, interviewing cheese specialists and food historians, including spending plenty of time in Wisconsin, where more cheddar is produced in the country than anywhere else.

It’s chock full of fun facts – while cheddar was born in the English town of, wait for it….Cheddar, there was a time in the 19th-century when America was the lead exporter of cheddar to England. Edgar explores how cheddar became America’s signature cheese, and how American politics, business and factories all tied into the future of the cheese.

Edgar’s writing style is quirky, written in a more casual, journalistic style manner that makes you feel like you’re having a beer with the author, as he tells you his epic road trip about the history of cheddar.

He can come off rather pretentious – he’s a co-op loving anti-hipster old punk rocker that “knew about that cheese before it was famous” type of guy – his enthusiasm for the yellow cheese is evident, and you’ll catch on quickly.