Bowl and glaze — the work of Chic Lotz 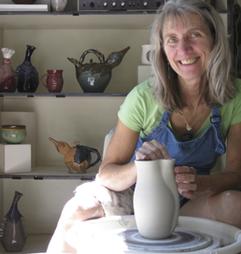 Exclusive to the Sun by Jonathan Farrell

“It’s the glaze,” said Grass Valley ceramic artist Chic Lotz. “I had to learn a lot on my own just to get it right. Much of what I learned they did not teach in college.”

Lotz has spent this fall organizing her exhibit at the Community Center in Sonoma and preparing to teach an October 24-25 workshop. She took a few moments after the opening reception on October 7 to talk about her journey with art and clay.

Lotz will teach the intermediate level workshop “All About Bowls–Thrown, Altered, Stamped and Carved” on Saturday and Sunday, October 24 and 25, 10am-4 pm, at the Sonoma Community Center.

Originally from Pittsburg, Lotz was pursing her degree in Special Education. “I wanted to maintain a strong GPA and part of the requirement for my degree was to take an elective class. Friends said to take an Intro to Art class because it would be an easy grade. Just listen to the lectures, watch the presentations, take notes and write an essay or two…a piece of cake!”

Yes, the was easy, she said. But it happened to include a presentation on pottery. “I was fascinated, I wanted to learn more,” she said. The following semester she signed up for a pottery class and the unexpected journey to a career in art began.

“I soon realized once I was in that pottery class, pottery might look easy, but it is not,” Lotz admits. “Still, I was hooked and wanted to keep going. So I did.”

Over time she began to master the art, even utilizing some of her Special Ed training. 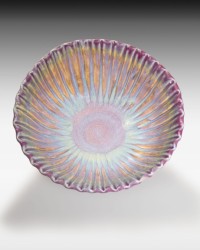 “All potters know about glazes. But few understand the chemistry of glazing,” she said, explaining that “Glaze is not a pigment, it is a mineral. And what many people don’t know is that it is the chemistry of the mineral in the glaze that makes that particular piece of pottery special, makes it shine or glimmer or have a special texture.”

Perhaps the highest compliment of ceramic art is when it is used, such as plates or cups at a dinner setting. “I had made some salad plates and I was so eager to use them,” she said. But as she fixed the salad on the plate, she discovered that that not all glazes are safe for use on plates intended for food. “So, I began to investigate and looked up all sorts of materials, she said. I was overwhelmed at first.”

Her colleague, teaching associate and friend Flo Fahrenheit, concurred. “I know Chic really struggled on that. Glazing is a detailed science that is connected to the earth, like the clay. Yes, it is about minerals. But there is also much more a potter must know. When Chic went seeking more knowledge on glazing, one book would say one thing and then another book would say something else. It was really complicated, but Chic managed to take all of that complex and varying information and condense it so it made sense.”

“I believe it was her background in Special Ed that really helped her get through all that and put it into a format that people could understand,” said Fahrenheit. This quest for understanding glazing and glazes was all part of her journey which as she was learning all this, she had initially left the East Coast and took a teaching job in Marietta, Georgia.

“It was for the Marietta Parks and Recreation and I enjoyed that job,” said Lotz. But after 10 years there, things changed abruptly. “The building were I had been working in got condemned and so my job was put on hold. Then believe it or not the boyfriend I was dating at the time, broke up with me and the house where I had been living was put up for sale so I had to leave.”

In a dither, Lotz turned to Yoga. “That sort of thing always helps me to focus and gain perspective,” she said. While at Yoga the coordinator guided the meditation for that afternoon to think about places of calm and restoration. “I always liked the outdoors, rivers, lakes, mountains, open spaces and as I was reflecting on the imagery of the meditation, I realized, a place like that would be for me.”

As it turned out, a flyer describing the very atmosphere she was meditating about appeared. It was for an artists’ workshop/community in the Grass Valley area. Through a friend of a friend, Lotz was able to make a visit to Grass Valley and that is where she has been ever since. 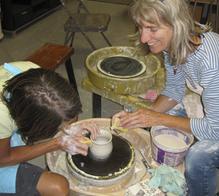 Yet, it has been her quest for understanding glazes and glazing chemistry that has spurred Lotz’ career to greater heights. Fahrenheit said that “Chic had a way of putting all the information together in charts and step-by-step notes that people found her classes very helpful.” Lotz figured that if she could put it all in easy to follow notes and handouts, that would allow students more hands-on experience time with the clay and the wheel rather than note taking. As her classes grew, word got around that Lotz knew her stuff about glazing.

“Chic thinks about glazes and pottery all the time. Ceramics are her Zen” said Fahrenheit. “Even before a piece is placed in the kiln, she has thoughts about what glaze to use.” Fahrenheit pointed out that some of Lotz more advanced and intensive workshops are not for dabblers. “Chic is very serious and organized and you can see that in the notes and handouts she gives to her students.”

The exhibit highlights the work of two instructors who will be teaching art workshops at Sonoma Community Center this fall.

A visiting artist and instructor, Lotz will teach an intermediate level workshop “All About Bowls–Thrown, Altered, Stamped and Carved” on Saturday and Sunday, October 24 and 25 from 10am-4 pm.

Local master Dick Cole will teach “The Figure in Watercolor” Saturday and Sunday, November 14-15 from 9am-4pm at the Community Center. Cole’s popular workshops explore watercolor painting as applied to the human figure. In this class, students will work from black and white photographs to emphasize value, but will be encouraged to keep the painting free flowing and incorporate other media into the mix.

Cole is an illustrator and watercolorist with over 40 years of experience. A graduate of UCLA and The Art Center College of Design, he has worked as a graphic designer, art director, and illustrator in New York, Palo Alto, and San Francisco. He has taught painting and illustration at the Academy of Art University, San Jose State University and Foothill College, and is an Artist Member of the California Art Club. He is a past president of the National Watercolor Society. Among other awards, Cole has received Best of Show awards from the California Watercolor National Exhibiton, the Grand National Exposition, the Northwest Watercolor Society and the Watercolor West National Show.

For more information about the exhibit, call the Community Center at (707) 938-4626 x1 or visit sonomacommunitycenter.org.