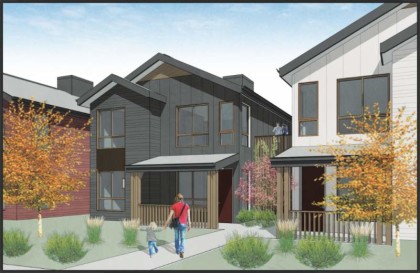 A Sonoma neighborhood group opposed to a 48-unit affordable housing complex – the Altamira Family Apartments proposed for 20269 Broadway – will take its case to the Sonoma City Council on January 29.

Nearby resident Lynn Fisk-Watts has lodged an appeal Sonoma Planning Commission’s November 9 decision of to green-light the project.

The land has long been earmarked by the city for affordable housing project. Since its initial proposal in 2015, the developer, Satellite Affordable Housing Associates, has made three sets of planning changes in response to public input. In the final plan, all three-story buildings have been eliminated; building heights, rooflines and setbacks have been adjusted; and the primary vehicle entry has been relocated from Clay Street to Broadway.

Fisk-Watts, a member of the Community Advisory Committee formed by SAHA to advise the project, remains opposed. She is also the contact for South Sonoma Group, which is against the development as approved.

Her appeal questions the density of the project in contrast to the immediate neighborhood, and the impact of new-resident parking and traffic. There is also a safety concern regarding the loading dock on Clay Street that services The Lodge. Large trucks using the dock jut far into the street, causing traffic congestion and safety issues, according to a South Sonoma Group statement. “The developer has proposed placing apartments with front porches on Clay Street, across from the loading dock. This plan does not reflect respect for the future tenants.”

When it formed to oppose the project, the group argued that the developer should set aside a number of units for seniors, and “increase the diversity of future residents.” Limiting the eligible income level – a federal designation still in place – the complex “exclude folks making a teacher’s salary, for example, because they would earn too much money to qualify.”

At its November meeting, the Sonoma Planning Commission approved the 48-unit project, exempting it from a zoning limit if 40, with a 3-2 vote.

“It can be said that a strong, good faith effort has been made to address neighbors’ issues,” said Fred Allebach, a member of the same Community Advisory Committee (and Sun contributor). “The City has a demonstrable backlog of unbuilt area median income-level affordable housing. It is only fair and right to approve this project and all its currently proposed units.”

One thought on “Council to rule on affordable housing project”