Under the Sun: Daniel Kahn, from homeless to shelter manager 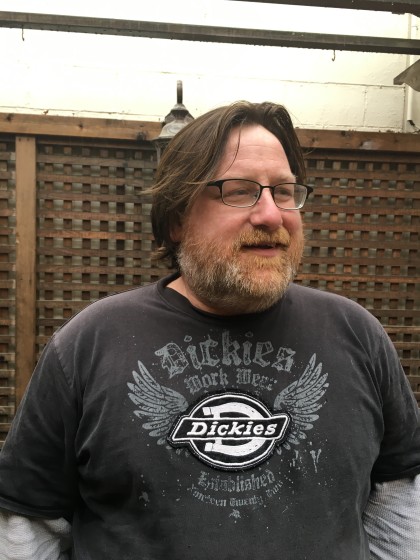 So you have lived at The Haven?

Yes. It was the turning point for me. In March 2015 we had nothing left and nowhere to go. The other shelters split families up. But The Haven took me, my wife and our teenage son in as a family. We ended up staying six months.

Are you from around here?

I was born in St. Petersburg, Florida, and lived in Tampa till I was five. Then in Indianapolis, later St. Louis, We followed my dad’s promotions in sales. But my parents got divorced when I was 11 and I was angry. By fifteen-and-a-half I was doing time in the Youth Authority. When I got out, my parents didn’t want me. As a favor to my mother, her brother in San Francisco took me in. So my uncle and his husband John were my introduction to S.F. culture.

Completely different than the Midwest. And that was a good thing. But I still hadn’t dealt with my anger, so my problems manifested in drug use. At 18 I ended up in Forest Knolls drug treatment center in Marin County. When I had been sober for a year I went to a Narcotics Anonymous convention in Anaheim, where I met my wife.

We got married and I started acting like an adult. We had a daughter, and ten years later, a son. My wife had a great job for the County of Marin, and I was a stay-at-home dad for 18 years. But then my wife developed congestive heart failure. She couldn’t work.

And that’s where it all fell apart?

I tried to get a job. Went to lots of interviews, but there were with these men, and they would roll their eyes when I said my only background was a stay-at-home dad for all that time. And my wife got sicker and sicker. So we moved to Redding, where the rents were about half. I had to take care of my wife, and her SDI was running out. So we decided that if we were going to be homeless, we’d better do it where we knew some people. So we moved to Sonoma County.

All the shelters had six-month waiting lists.

I spent my mornings looking for food, and my afternoons trying to find a place to stay. In March 2015 The Haven took us in. My son started at the high school. And I went to a 16-week cooking school.

It was run by a homeless shelter in Novato. To get there I took the early bus to San Rafael, another back to Novato.

I got a great job at the Sunflower Caffe. That gave me a confidence in myself I had never had. And we were accepted into a Rapid ReHousing program through COTS in Petaluma. We got a great house here in town.

My wife had a serious heart episode, spent a month in CCU. Sunflower was great to me. They even gave me paid leave to take care of my wife, but the responsibilities to care for her made me unreliable, and eventually they had to let me go. I would have fired me a long time earlier. And after six months in our home we got notice to vacate because it was going to be sold.

So then you got a job at The Haven?

Yes, on weekends. And soon after we had to move back in there. This time I came back with a plan. I started working fulltime at The Haven, and I was saving money. I saved the $5300 we needed to move into a new place. It’s a two-bedroom duplex. My son lives with us.

How is your wife doing?

She’s better, due to a medication. I had been spending my time-off trying to fund raise for a heart replacement for her, but now she is off the list for that.

What’s happening at the Winter Shelter?

We have 25 unique individuals who have stayed with us this year. Last year, with the torrential rains, we had 33. I worry when someone doesn’t show up. I think I can relate to people at the shelter better because I’ve been there. Pastor Rob, of the Sonoma Alliance Church that provides the Shelter space, is great. No proselytizing. Just help and caring. Their PG&E bill doubles during the shelter.

It wears on you. After a time it’s who you become. You are not trusting. It can suck the hope right out of you.

Couldn’t you probably get a job cooking again? Yes, but it’s important to me that I give back. The Haven gave me everything. And I get to cook on the weekends for the Winter Shelter folks. Breakfast, and a good bag lunch.

One thought on “Under the Sun: Daniel Kahn, from homeless to shelter manager”