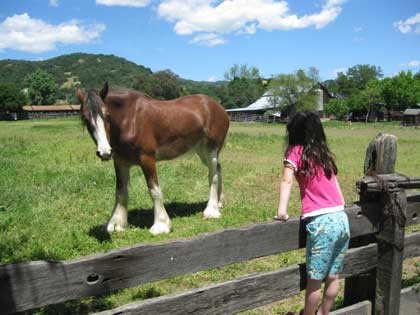 The Castagnasso Clydesdale Farm, the scenic horse pasture adjacent to the Sonoma Mission on East Spain Street, is on the market $7.6 million.

Zoned for residential development, the overall property could ultimately see up to 30 units built on its 2.7 acres. The lot, owned by Deana Castagnasso, includes at its eastern side a two-story farmhouse, circa 1890, and two barns. The structures are identified in the National Register of Historic Places.

The property is part of the family’s five-generation Clydesdale breeding operation now run in multiple sites by Tony Knecht, Deana’s son. It began in 1922, and reportedly will continue as Knecht consolidates operations.

The listing agent is Mark Stornetta of Alain Pinel Realtors.

In 2010, a deal with the family and the Sonoma County Open Space District fell through. The initial plan was for the district to contribute $2.5 million to the purchase of a conservation easement, in which the Castagnasso family would retain ownership of the land but agree to prohibit any development. The city of Sonoma pledged $1.9 million to the project, and negotiations began in 2007. The asking price then was about $4.5 million.