County was wrong to include neighborhood in Springs Plan 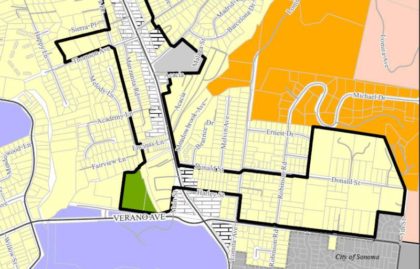 It was simply by chance that the Donald/Lomita/Robinson neighborhood discovered a few weeks ago that we were included as part of the Springs Specific Plan. Historically, “the Springs” has always referred to a corridor one block east and west of Highway 12 from about Agua Caliente Road to Verano Avenue. There have been multiple Redevelopment programs for the Springs dating back to the 1990s that clearly map this as the target area. And the County’s initial application to the Association of Bay Area Governments for the $450,000 grant funding included three maps, none of which included our neighborhood area. Somehow the Springs Specific Plan area grew a “leg” so that it extends more than ¾-mile away from Highway 12, along rural Donald Street.

The Springs Specific Plan has been three years or more in development with the County’s PMRD, but it failed to recognize us as a stakeholders group, and did not include us in any of the planning. The County’s outreach included posting bilingual notices at La Luz, the Community Resource Center at El Verano School and La Michoacana ice cream store, and sending flyers home with students at El Verano and Flowery schools. This is not our geographic location. Children on our street attend the Sassarini Elementary School. Most of the newspaper articles the County cited for public notification did not discuss Plan boundaries. One newspaper article even described the boundaries incorrectly stating the Springs area was a corridor along highway 12, again, overlooking the 3/4 mile extension into our neighborhood.

Clearly by the number of neighborhood people attending last week’s meeting shows we would have been involved from the beginning if the County’s outreach had not failed. A simple postcard to all the parcel numbers in the planning area would have sufficed.