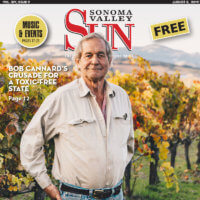 Crops begin with seeds and so do ideas. To thrive, they both need friendly environments and human beings who nurture them. Bob Cannard has been planting seeds and harvesting crops for the last four decades. So, it ought not to be surprising that he’s planted the seed of an idea that would transform farming and agriculture in California, where it’s a multi-billion-dollar-a-year industry dependent on toxic chemicals.

Cannard wants California to ban all chemical pesticides and herbicides by the year 2050.

With help from Karen Lee and Nellie Praetzel, he has just launched an organization (organiccalifornia2050.org) and a movement to liberate the whole state from products like the weed-killing spray Roundup, which has been shown to cause cancer in human beings.

Robert Henry (Bob) Cannard, the man behind the movement for a toxic-free state, is eminently suited to serve as a leader. For decades, he taught thousands of students at Santa Rosa Junior College how to grow organic fruits and vegetables, not harm the earth, and at the same time make money. He’s also grown vegetables for Alice Waters’ Chez Panisse ever since it opened, and at Green String Farm on the edge of Petaluma, he has run a program for interns from all over the country who have learned his farming principles.

Foodies from all over shop at the Green String farm stand for olive oil, bread, and preserves, as well as cabbages, potatoes, radishes, and apples cultivated in soil free of toxic pesticides and herbicides. Now at the age of 66, Cannard could be thinking about retiring to a rocking chair where he could watch the weeds grow tall in his own backyard. No one would fault him if he did that, and certainly not his son, Ross, who is assuming more farming responsibilities. Bob Cannard could kick back and not grow another potato, tomato, grape, or olive.

But at 66, he’s ready to take on the giant corporations that manufacture deadly chemicals, such as glyphosate, though he also explains, “I’m not really an activist. I’m a farmer and a gardener who grows local food for local people.” Rather, he’s an engaged, enraged citizen, and he’s primed to mount a campaign to make California the first all-organic state in the U.S. “You’re god-damned right I’m angry,” he says. “I’m pissed off.”

There are citizens who share Cannard’s values and beliefs all across Sonoma, including the members of Preserve Rural Sonoma County (PRSC). Padi Selwyn from PRSC points out that tons of Roundup are used each year in Sonoma County. It adds up to approximately 1/3 of a cup for every man, woman, and child. “Research has tied this poison to a range of cancers, Parkinson’s, reproductive disorders, and more, not to mention soil health degradation, harm to pollinator habitat, and wildlife health problems,” Selwyn says. “Does Sonoma County really want to allow the continued use of this devastating pesticide?”

Bob Cannard comes to the world of politics from the very ground under his feet. Not surprisingly, his questions and his musings are down-to-earth and have a disarming frankness about them.

“I don’t understand why anyone would want to play baseball on a field sprayed with toxic chemicals,” he says. “And why would anyone want to buy and eat vegetables grown in soils that have been poisoned by products like Roundup?”

Cannard envisions a campaign of epic proportions, where  the people of California are David and companies like Bayer and Monsanto are Goliath.

To get the movement rolling, Cannard has written a ballot measure that directs “the duly elected governor of our state and subservient officers to develop protocols resulting in all commercial and domestic agricultural activities to conform within the parameters as set forth under the National Organic Program as executed by the USDA by the year 2050 in an annually progressive schedule.”

Cannard has been prompted to take action now in part because of the growing body of scientific evidence that has shown that there’s a dramatic link between glyphosate and cancer rates among human beings. A jury in San Francisco recently awarded Sonoma County resident Edwin Hardeman $80 million, finding that Monsanto’s Roundup was a likely cause of his non-Hodgkin’s lymphoma.

Thousands of other American citizens with cancers have filed lawsuits against Monsanto, which was recently purchased by Bayer, the German-based multinational corporation, and one of the largest pharmaceutical companies in the world. (In 2018, Bayer’s revenue was $40 billion Euros). No wonder the company has insisted, even after the verdict in the Hardeman case, that Roundup has no harmful impacts on human beings.

“Companies like Bayer must want to poison us,” Cannard says. “They won’t change unless and until they’re forced to change. Fortunately, we still have the freedom to speak and to act publicly. Speech is better than silence.”

Cannard holds the same core beliefs as Rachel Carson, who told a close friend not long before she wrote Silent Spring, “Knowing what I do, there would be no future peace for me if I kept silent.” 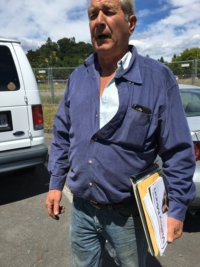 Cannard would like California to move away from products such as glyphosate well before 2050. He’d like all use of glyphosate to stop before it causes more harm than it has already caused. But he knows that grass roots democracy moves slowly, as does big government. He doesn’t expect change to take place anytime soon. Indeed, he knows that it will take time, energy, and human will power to gather the 600,000 or so signatures that will be necessary to put the Organic California 2050 measure on the ballot in 2020.

In the spring of 2019, Cannard tried to launch a petition drive in Sonoma County that would have placed on the ballot a measure banning glyphosate locally. Bruce D. Goldstein, county council, told him in a letter dated May 30, that what he aimed to do went against state and federal law. If he accepted Cannard’s petition, Goldstein explained, “I would have to violate my oath to uphold the Constitutions of the United States and the state of California.”

Cannard considered the option of taking the county to court and decided against it. Instead, he’s upped the political ante. From the stage of Sonoma, he’s leapt to the stage of California.

He suspects that, even if his statewide measure wins on Election Day, corporate agriculture will fight it tooth and nail. After all, the petrochemical industry lambasted Rachel Carson after Silent Spring blew the lid on DDT, which killed birds and wildlife.

If present farming practices go on, and if humans do nothing to stop climate change, Cannard envisions a time when Sonoma County will be a desert. Alarmist? Possibly. But these are alarming times. Years ago, Cannard launched a ballot measure in Sonoma County to require the labeling of foods with GMOs. “I didn’t succeed but I raised the issue and increased awareness. The state of Oregon has adopted GMO labeling.”

Now, he’s optimistic about Organic California 2050. “We will have petitions everywhere,” he says. “We’ll also be on social media. Cannard says he has thousands of potential followers in the state, many of them students who took his classes or who worked as interns at Green String Farm.

“I’m getting older by the day and I’m nearly finished, but not quite, not yet. Bring it on.”

Jonah Raskin is the author of Field Days: A Year of Farming, Eating and Drinking Wine in California.