The City of Sonoma’s police department is, by contract, administered and staffed by the Sonoma County Sheriff’s Office. This provides efficiencies and lower costs compared to running its own police force. Though the City has its own Chief of Police (selected by the city manager and the Sheriff), all officers are ultimately Sheriff’s Office employees. This arrangement raises questions about enforcement policy, particularly as the County Sheriff can unilaterally decide what rules to enforce, and what rules to ignore. This happened recently when Sheriff Mark Essick declared that he was not going to enforce the pandemic-related policies of the Sonoma County Health Officer… The announcement – that the Sheriff was choosing to ignore rules he didn’t agree with – was a surprise to most County officials. Some, like the District Attorney and Sonoma Mayor Logan Harvey, said Essick’s arbitrary decision was flat-out wrong. Others, like the Board of Supervisors, reached an uneasy truce with Essick, with whom they work but do not supervise. The hard fact is that Essick is an independently elected official, and does not answer to anyone except Sonoma County voters. Short of a recall (the petitions are circulating) or waiting for the next election (2022), there’s apparently no way to hold a rogue sheriff accountable… If only the next cop who pulls me over will decide not to enforce that silly speeding law.

While choosing “freedoms” over public health, Essick did make a strong move earlier this month with a departmental ban of the choke hold. Now in the hard glare of the national spotlight, the controversial technique, as Essick describes, “took on particular urgency in Sonoma County since the death of David Ward in November of 2019.” Ward, you may recall and some will never forget, was killed by an officer (now fired) after a Petaluma traffic stop. “At that time, the SCSO declined to eliminate use of the carotid hold,” stated Essick. Though his department “was open to continuing the discussion about eliminating (it’s) use” his definitive ban came only after Governor Newsom recently ordered the state police training program to stop teaching officers the use of the carotid hold. “In response, under the totality of the circumstances, the SCSO decided to proactively eliminate the use of the carotid hold effective immediately.” So there’s that. 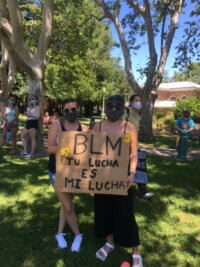 Despite the paranoia amplified by some boarded-up store windows and tone-deaf (at best) social media posts (like, “I heard there will be riots”), Sonoma’s Black Lives Matter protests were peaceful affairs. There was anger, to be sure, and the sharing of personal grief and struggle. But also, that sense of world-changing determination that seems unique, alas, to the young. These are dangerous times, but there is possibility in the air. It’s heady stuff… But while voices like Ben Boyce and Will Shonbrun are feeling the vibe, Jay Gamel, checking in from Kenwood, hopes the young activists will be “a lot more persistent than our generation was. We (I’m 75) disturbed a lot of crap but eventually got tired and wandered off, like every generation before us, leaving the system virtually intact, if not stronger for surviving our efforts. So, yeah, go kids. You got the message earlier than we did, so maybe it will stick longer. Here’s hoping.” 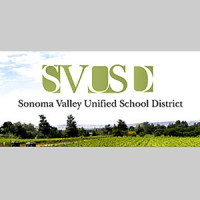 Sonoma Valley School District Board Chair John Kelly, blogging about the national crisis, drilled down to a conclusion of the District’s Equity & Inclusion Task Force. In 2018, the panel recommended incorporating restorative justice practices into the discipline protocol. As Kelly quotes the report, “Restorative justice has been shown to be an effective alternative to punitive responses to wrongdoing.” But although the Task Force noted some past attempts by SVUSD to fully implement restorative justice practices, “none of these attempts resulted in across-the-board implementation.” Kelly says it’s time for full implementation, citing data from L.A. showing a 92 percent decrease in the number of days lost to suspensions as a result of its restorative justice program. “As our Task Force noted, ‘these statistics are especially relevant to this district that has a disproportionately high level of low [socio-economic status] students who are suspended and/or expelled.’” 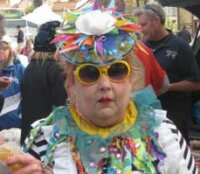 Now, to lighten things up at last, we bring on the clown. Sonoma’s own Popo, Penny Byrd, the subject of a St. Helena school project chosen as a national finalist for the NPR Student Podcast Challenge. Searching for a subject, the teens landed on a figure from their childhood – the beloved clown who painted their faces, many displayed in photos on the walls of The Big Dipper, the small town’s now-defunct ice cream shop. Whatever happened to Popo the Clown? “There was something drawing us to this mystery,” Reid Ivanoff says in the podcast. “Maybe it was closure or maybe we wanted to have a little fun and act like detectives, but either way Popo brought us closer together.” The team tracked her down for an interview and were delighted and moved by the reconnection… The nine-minute podcast is one of 15 finalists, chosen from some 2,000 entries nationwide. Nostalgia, it seems, knows no age.