On the Edge is an apt description of life right now, artist or not.

Sonoma artists, what are the odds you could exhibit your art in a major museum? Answer: downright daunting. But that’s the challenge artists took on when the de Young Museum in San Francisco announced the De Young Open, an exhibition of Bay Area art in celebration of its 125th Anniversary. They issued a Call to Artists in March, asking for their creative interpretation of life On the Edge, an apt description of life for everyone in these troubled times, artist or not. The idea was to reach out to artists in the Bay Area, build relationships, and perhaps revisit the open exhibition series every few years.

The phrase “Beauty is in the eye of the beholder” takes on new meaning when the beholders are jurors viewing your deeply personal interpretation of art. This exhibition had three jurors: Hung Liu, Mildred Howard and Enrique Chagoya. As can be expected, the judging required several weeks, with results issued at the beginning of August.

Imagine an artist’s surprise and elation receiving an acceptance email! Sixty Sonoma County artists made it in, and a few of those are here in the town of Sonoma. Here are just three proud participants. 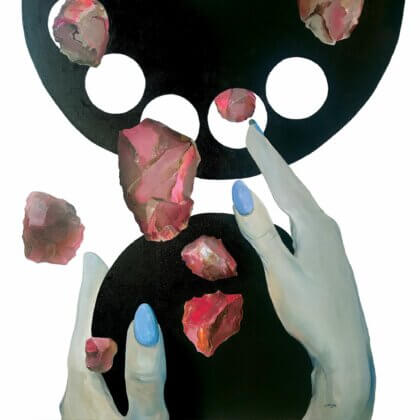 Sarah recalls drawing from a very early age and believes she got her creative streak from her mother, who was a singer. She’s had an eventful and varied life as an actress, designer of humorous cards, graphic artist and book jacket designer, and painter who works in acrylics and watercolors.

A native New Yorker, Sarah moved to the Bay Area in 2004 with her husband and daughter. A frequent visitor to the deYoung and Legion of Honor, she is deeply honored by their selection of her painting for the anniversary exhibition. “I think it’s wonderful of them to offer this opportunity to local artists,” she said.

Sarah’s work reflects and embodies her impressions of the world in ways that vary from highly realistic to highly metaphoric. “Dialing Sisyphus”, her painting accepted by the de Young Museum, is of the latter type. An acrylic, 36” by 36”, it depicts a gray, lifeless hand dialing an old black rotary telephone through which jewel-like rocks fall. “I’ve always been fascinated with the story of Sisyphus,” she explained. “It captures how most people experience and describe their own lives. The endless labors of Sisyphus exemplify what it is to be human.”

Sarah feels fortunate to work at home, and also in the “Electric Snail Studio” which she shares with three other women in San Francisco. Each is a different kind of artist, but they have collaborated as part of San Francisco’s “open studio” months with inventive “hot slime” creations and a fun and quirky art-based Bingo game.

The coronavirus pandemic has provided Sarah with impressions, experiences, and ideas that are sure to find their way into her art. A member and loyal supporter of Arts Guild of Sonoma, she exhibits her work there and enjoys the opportunity to participate in its thriving arts community. She is working on a series of neo-surrealist watercolors currently, which will find their way onto the walls of the Arts Guild in due time.

Kirk grew up in a small town in North Carolina in a family of mill workers who had no inclination to explore the arts.  His inaugural visit to an art museum was during his first year of art school at Virginia Commonwealth University, when his painting professor took the class to see a Franz Kline exhibition at the National Gallery in Washington DC. Kirk recalls, “I was gob-smacked and forever hooked on the museum experience of seeing great works in large, well-lit spaces.”

He continued, “I moved with my bride from Detroit to San Francisco in 1969 to join Young & Rubicam Advertising as an Art Director.  We rented an apartment above UCSF, so Golden Gate Park and the de Young Museum of Art were, in a way, our ‘back yard.’ As exciting as Haight Ashbury was at the time, I preferred to escape to the quieter sections of the park, and often went into the deYoung to get lost in its exhibits.”

The collage artwork selected by the de Young, “Wrestling with my Dreams,” was created from Kirk’s large collection of Japanese papers and ephemera. On wooden panels, it is overlaid with papers and pages from materials used in construction of Japanese screens.  “Some of the items are worm-eaten Japanese block prints and copies of Japanese drawings and writings,” he says. “The aesthetic of historical Asian imagery, with their exotic and graphic power, has long been an unexplained attraction for me. The figures in Asian art often create a sense of movement that’s appealing.”

Kirk had a moment of disbelief when he read the announcement of the de Young Open. “To be presented with a shot at having a work of mine hang in a show at such an esteemed museum seemed unimaginable.  The odds of being in the exhibition had seemed small. I was honored and thrilled to have a piece accepted and to be given the opportunity to have my work shown along with so many exceptionally talented Bay Area artists.  A hugely validating experience. I am so grateful to the de Young for creating this extraordinary opportunity for all of us.” 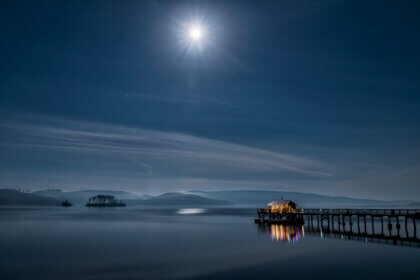 Mark is a gifted photographer with a fine eye for the natural world and the patience to set up breathtaking pictures, from the smallest detail on a plant or animal to the sweeping panorama of a mountain scene. His tagline is “exploring nature with artistic intent.” He enjoys photographing landscapes, seascapes, fauna and flora, but also travel photography.

He became interested in photography at the age of 12.  “My parents had a Kodak twin-lens Reflex camera that looked cool.  I built a small darkroom in the laundry room of our house (my mother graciously put up with it), developed my own film and made my own prints for many years.  I invested in serious equipment 14 years ago, and I continue to enjoy just about every book, article, blog, and video about photography that I can access.”

Many of Mark’s photographs are taken locally in this beautiful area, but his passion takes him to all corners of the world, like Oregon, Washington, New Mexico, Canada, French Polynesia, Pitcairn Island, Easter Island, India, Norway and Iceland.  Mark says, “There’s an old adage: ‘If you want to take more interesting photographs, stand in more interesting places.’ Many of those places are close to home if you look for them, but I do enjoy taking photographs of distant lands.” Mark’s photographs are exhibited each month at the Arts Guild of Sonoma, 140 E. Napa St..

The de Young selected Mark’s photograph “Nick’s at Night,” taken at Nick’s Cove at Tomales Bay. Mark says he was staying in a cabin at the shore when a full moon awakened him at 4 a.m. He hurriedly grabbed his camera and tripod, and set up on the deck. “I waited and waited,” he said. “The moon positioned just where I needed it, the moonlight shimmered on the bay, a faint fog drifted over the hills on the opposite shore, and the boat shack’s party lights reflected on the calm water below. The photograph captures the mood in this silent, still and beautiful night.

“I’m honored the jurors chose ‘Nick’s at Night’ for the anniversary exhibition,” Mark says. “I’ve visited the de Young many times and have always been fascinated by the variety and quality of its permanent collections and exciting special exhibitions. I’m beyond elated that one of my photographs will be displayed.”

“On the Edge” opens in the Herbst Galleries at the de Young in the forthcoming weeks, Covid-19 regulations permitting. Date will be announced later. The show will also be online. Check the before you go:  deyoung.famsf.org.

Jackie Lee is a writer and artist living in Sonoma. Her focus is to showcase individual art events and artists as well as those represented by galleries. [email protected]