By Brytann Busick | Special to The Sun —

The West seems to be on track to have catastrophic wildfires every year. Diverse interests place blame on a wide variety of causes including climate change and decades of inadequate land management. Here in Sonoma County, as the smoke dissipates from our latest fire, landowners continue to assess the feasibility of implementing fire resiliency measures on their properties. Though a wide variety of tools are available, barriers including high costs, lack of labor, and regulatory red tape leave many facing uncertainty about where to begin.

Stephanie Larson, Sonoma County director and livestock range management advisor, said that another fire season is always just around the corner and whether a landowner has 20 acres or 200,000, the process of implementing fire resiliency practices can be overwhelming.

“Leaving the land as ‘natural’ doesn’t work anymore,” Larson said. “It’s not actually how it evolved, and now it’s so choked and fire-prone that it’s a liability for us all. We have all seen that very clearly over the past four years.” 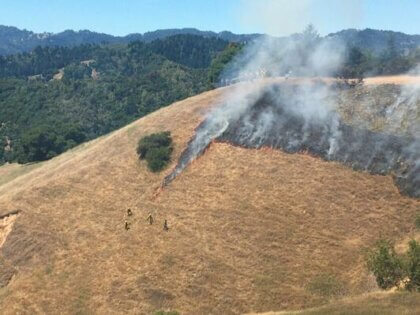 With less than 10 percent of land in federal or state ownership, most of Sonoma County is privately owned and small scale. “The burden and responsibility of keeping our community more fire-safe and fire-resilient are on the backs of landowners,” Larson said. “Both landowners and community members must understand all the practices available and the wide variety and scale of costs and labor needed to implement them.”

Drew Loganbill is the natural resource conservation service district conservationist in the Petaluma field office. He provides technical assistance to agricultural producers in Marin and Sonoma County and works to prevent environmental degradation, which includes wildfire.

“More and more when I see these fires, I see the hardship on agricultural producers, whether it’s the livestock landowners losing all of their feed at once or vineyards losing vines or irrigation systems,” Loganbill said.

He attributes increased catastrophic fires in Sonoma County to a combination of climatic anomalies and lack of management. However, he sees opportunities to help private landowners to create more fire resilient landscapes by implementing land management tools, which won’t necessarily stop wildfires from occurring but will help them be less destructive. But doing so can be challenging, costly, and time-consuming.

“We do projects in areas where a fire hasn’t struck including fuel load reduction, fuel breaks, and forest thinning,” Loganbill said. “We also have programs available to assist post-fire by doing erosion control, thinning of dead and dying material, slash removal, and replanting.”

He said that even though many effective tools are available, landowners face many obstacles. One of the most glaring barriers is the inability of the average 10-acre parcel to generate enough profit to pay for the necessary improvements.

“Even if you were to do a timber harvest plan, most landowners can’t really generate money to put back into their property,” Loganbill said. “It is expensive to properly do fuel load reduction work and other improvements.”

Matt Greene of Matt Greene Forestry & Biological Consulting has been a Registered Professional Forester working primarily for small family forests and ranchers and non-industrial landowners for 21 years. He agreed that land size is often a barrier to entry.

According to the Sonoma Land Trust, the average forest parcel in Sonoma County is 10 acres. Greene said, “a parcel that small is going to have a hard time offsetting the $1,000 to $2,500 cost per acre to the fuels reduction work that needs to get done including thinning, grazing, and brush removal.”

“We’ve had some limited success securing grant funding for projects putting in fuel breaks for ingress/egress roads for fire safety, but broadscale across the county, projects aren’t moving forward yet,” Greene said.

Lessons from the past can help us have more fire resilient forests in the future.

“We did such a good job for about 70 to 90 years of suppressing large wildfires, but now we have fuels built up as we’ve never seen before,” Greene said. “If you look at the historic literature, Native Americans and lightning were burning land every seven to nine  years in coastal locations of Sonoma County and that’s not the case anymore.” 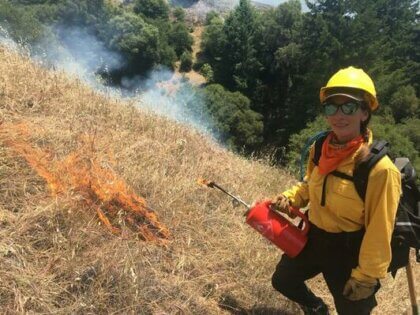 What is needed now? Experts say, a reasonable discussion about forest management.

“Today, we have an overabundance of trees per acre,” Greene said. “Historically, in coastal redwood forests in Sonoma County we likely had 40-75 trees per acre and now in many forests there are 200 or 300 trees per acre or more. Not every tree standing is needed whether for forest production, wildlife, or beneficial water use. We are loving our forests to death.”

That doesn’t mean that the only solution is to do more commercial logging, but that fuel management needs to be a priority.

“We need to reduce smaller diameter materials, brush, and downed woody debris, which all help carry fires as well as managing our maturing forests,” Greene said. “These non-commercial projects are costly to landowners and have no economic gains.”

Going forward, Greene said that it is going to take time to reduce ladder fuels and forest fuels to a point where they are manageable. Then, landowners must keep at it.

Most vegetation sprouts following cutting, burning, or disturbance from grazing, so Greene said it’s important to remember that applying a management tool is not a one-time fix-all.

“That’s what’s really hard—when you have to tell a landowner that it’s going to cost $1,000 to $2,500 per acre every five to eight years,” Greene said. “Hopefully, you can reduce the fuel load so that each successive follow-up is less costly.”

With only three or four loggers in Sonoma County, the lack of skilled labor is a significant barrier. “That low number is tied to available jobs, Greene said. “If landowners aren’t going to be doing the jobs then we won’t have the labor necessary to complete the work that is necessary county-wide.”

“If you are going to do a timber harvest in Sonoma County, it’s a two-year process for most landowners and a timber harvest plan alone costs $40,000 to $50,000 on average,” Greene said. “A lot can change in two years and it’s hard to know where the markets will be. Right now, if you have Douglas fir or ponderosa pine, most projects don’t pencil unless you have several hundred acres of land available. The Redwood market is definitely depressed – it’s dropped by about 50 percent in the past three years.”

Greene said that because logging is so expensive, landowners should consider using all available management tools to reduce fire fuel on their property.

“Grazing is a great option,” Greene said. “It keeps the brush and ladder fuels down and is good for the whole ecology. The problem is that there probably is not enough livestock in the county right now to treat it.” 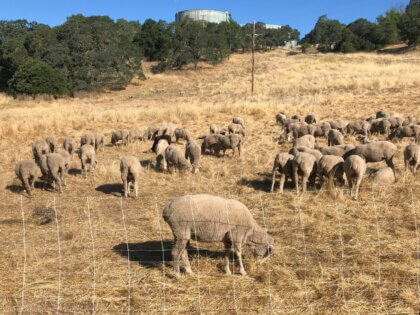 Larson said that she has always been pro grazing and is working hard to make widespread grazing more feasible. One program is Match.Graze, which presents options for short and long-term grazing contracts.

Garry Mahrt is a certified rangeland manager. He said that although grazing is an important tool a landowner can use, it can only help to a certain extent. “The use of fire as a tool had been taken out of the mix for decades, but you really need fire in the ecosystem,” Mahrt said. “At this point, it’s the most important tool because with so many years without management, we need to manage the fuel load. Where there is grassland, you can use grazing to help decrease the fuel load followed by a prescribed burn so that the intensity of the fire is lower.”

“Prescribed burns are a great tool, and if the fire isn’t too severe or too hot, then it is actually good for the land,” Larson said. Even then, preparing the land is important. “If we haven’t done anything to the land – if we haven’t thinned it, removed any trees, done any burns or grazed it –  when a fire comes through there is so much fuel that they burn so hot and sterilize the soil, leaving some real concerns for erosion.”

“A few years ago, we started a prescribed fire association called the Good Fire Alliance to get local groups together to do prescribed burns,” Larson said. “There are barriers – paperwork, air quality approval, fire district’s approval, liability insurance. A burn boss is going to cost $2,000 minimum and there are not many of them. Overall, there are a lot of hoops to jump through.”

Mahrt said that to become more commonplace, there must be cooperation from local fire districts, an expedited permitting process, larger burn day windows, and involvement from Cal Fire.

Larson said to become a truly fire-resilient county, there must be a complete change of mindset. “We need to do some serious evaluation of our timber management and harvest and the long-term management of our land using grazing and prescribed burns,” Larson said.

Loganbill said that going forward, landowners need to work collaboratively and within groups or watersheds to combine resources, save costs, and maximize the impact of fire fuel reduction projects. “A lot of times, the larger scale you go, the cheaper it is.“I have seen great success when landowners can share costs, time, and knowledge.”

Greene said that reducing the destruction of wildfires in Sonoma County is going to take everyone coming together and that the allocation of more public dollars to support private landowners would help reduce some of the barriers.

“It’s more than just an individual’s problem, it’s everyone’s problem,” Greene said. “We need groups and organizations to help with the economy of scale, the equipment, and the labor. Landowners need to look beyond just their ten acres and think about how their decisions impact the whole community.”

Brytann Busick is the communications director for the Sonoma County Farm Bureau.