On the anniversary of a historic Big Lie

Posted on August 9, 2021 by Stephanie Hiller 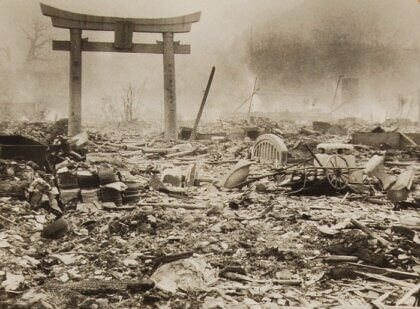 The biggest secret ever revealed was when the U.S. began the two billion dollar, two-year Manhattan Project to build the atomic bomb.

And the biggest lie was when Truman got on national radio to announce that this marvelous invention had been dropped on “Hiroshima, a military base. That was because we wished in this first attack to avoid, in so far as possible, the killing of civilians.” Hiroshima was not a military base; some 140,000 civilians died.

Bigger lies followed, such as the insistence that the bomb was used to justify the secret expense to Congress (which had not been told about it).

Then the biggest of all, the lie that the bombing of Hiroshima had ended the war.

In fact, that wasn’t true. A number of historians have produced the evidence the Japan was ready to surrender and that the US even knew, before August 6, Japan’s intention. You can read a powerful summary of the historical record by David Swanson, executive director of World Without War.

Today, August 9, is the anniversary of the 1945 bombing of Nagasaki, an event that was never even justified.

It’s important to remember the date and to honor the men, women and children who suffered horrific deaths the day of the bombing and for years thereafter from the radiation poisoning which the US also lied about.

The lies about the bomb, beginning with its inception and continuing to the present day, established a habitual pattern of deceit in this country that became so exaggerated during the reign of Donald Trump that it is no wonder that many people do not trust the government to tell the truth about the vaccine.

Paradoxically, most of these vax-skeptics are fans of the Abominable Donald. But not all. Some are goodhearted, well-meaning liberals who are well aware of the government’s addiction to lying and just don’t trust anyone anymore.

Hence one might say that the situation of polarization and cynicism now prevailing in this country is part of the enormous dark legacy of the atomic bomb.

The bomb, and its use, and the enormous sums expended to make more bombs, has almost destroyed this country and may lead to its complete collapse. Inventing, and using, an instrument capable of destroying the entire world in an eyeblink is a hard act to live with.

Now we have climate change delivering essentially the same message, that we’re all going to die if we don’t wake up. The tragic outcome of another addiction, to fossil fuels, climate change has an actual deadline. We have less than ten years to stop the dangerous pathway to our horrible demise, and the consequences have already begun.

The COP26 to be held in Glasgow in November may well be the critical turning point, when the nations of the world will either commit to policies that will hold back that demise or consign us all to the fires of hell.

In a brilliant move, a coalition has formed to alert the world to the relationship between the production of genocidal nuclear bombs and climate change.

As has been shown repeatedly and amply discussed at the World Beyond War 2017 NoWar conference, the military is the biggest polluter on the planet as well as the most culpable of bringing on climate change, far exceeding the contribution made by buildings, cars and the deceitful, lying fossil fuel companies.

It also includes 350.org and CodePink. Other groups are certain to join. CodePink has organized a petition and a useful information page for those who want to initiate protests at home or go to Glasgow.

This stark connection between an inflated, lugubrious and heedless military, with a proposed 2022 budget of $730 billion and more (the loathsome Repubs are trying to add $50 billion more), much of it to support the building of new nuclear intercontinental missiles. The money spent on war could easily provide resources for the entire transition to a clean-energy world with a stable climate and food for all.

Finally, the real culprit has been identified. War is the true source of our imminent demise. And it is not human nature. Civilizations have existed in the long-ago preliterate world for which no evidence of weapons has been found, much less nuclear bombs. Humanity has not always been propelled to engender its own mass suicide. The notion that making war is human nature is the biggest lie of all.

We’ve got to stop this insanity.

I’m getting ready to go to cold, drizzly Glasgow the first week of November to join this absolutely fundamental protest. Will you come?

Find out more, and at least sign the petition at Codepink.org/cop26