The daily news is replete with Covid-19 data, international tragedies, fires, floods, hurricanes, and drought, among other dramas. Change the channel and experience something different—plan a visit to a bucolic 32-acre property just outside the town of Sonoma where animals of all kinds live together in harmony.

There is a romanticism around saving animals, but few people actually do it. Owner Tracy Vogt created Charlie’s Acres in 2016, a pastoral sanctuary where she could not only provide a home for animals, who may have ended up on the dinner plate, but also a place where people could meet them, hear their stories, and make a meaningful connection.

“I specifically chose Sonoma to start a sanctuary because I felt really connected with the community, the beauty of Sonoma wine country, and its proximity to major Bay Area cities,” Tracy said. “I really felt I could make a difference in the farm animal space as there are billions that do not have their voices heard. My mission is to promote compassion and empathy at the sanctuary for both animals and humans.”

Charlie’s Acres residents range from tiny chickens called Silkies to a large Texas Longhorn steer named Mitch, a huge pig who at 700 pounds weighs about the same as a Harley Davidson, and everything in between—currently 149 animals. 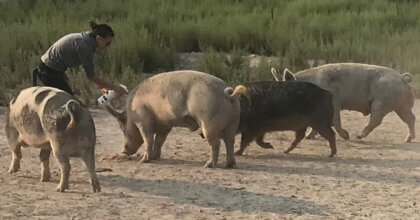 Included in the rescues are families of pigs, a horse rescued from starvation, two beautiful golden cows saved at the entrance of a slaughterhouse, and dozens of others. They were all in dire circumstances when rescued by Tracy and her group. The team gently nursed the animals back to health with medical care and good food, and they are now free from despair, enjoying the high life of eating, sleeping and …well, you know. It’s a farm.

Most residents had wretched beginnings: mistreatment, starvation, or physical disability, to name some. Roger, the big white sheep, is blind. But he shares his pasture comfortably with other sheep, including one that is deaf. Keeping them company are some chickens, who rather like some of the special food that Roger gets. Feeding time with them is like being in a 1950s Keystone Kops movie, minus the frantic organ music.

The large property is expertly managed by a dedicated onsite staff. They recently rescued a black pot-belly pig wandering in the neighborhood, who gave birth to eight beyond-cute piglets a few days later. Mother and piglets are healthy, happy, safe and being treated like royalty.

Volunteers have daily duties including feeding, watering, general socialization of animals with lots of TLC, the all-important cleaning of pens and pastures throughout the day, and preparation of food from vegetables donated by local grocery stores. They use an impressive 400 pounds of food daily, split between breakfast and dinner. The high cost of shavings and straw for bedding add to the high cost of operation.

Long-time volunteer Monna Throop said she had been helping animals for 30 years by not eating them, “but wanted to do more, as well as get to know the animals personally. Farm animals are not generally considered to have personalities, but they certainly do. Goats have a sense of humor, chickens can be affectionate, and others can be brats sometimes, but we still love them all.” 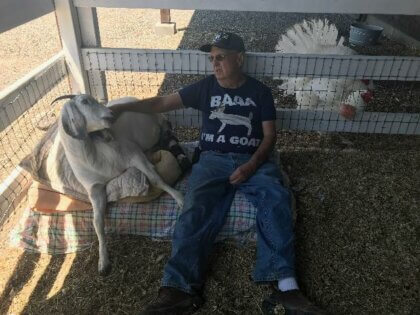 Volunteer Al Saunders decided to do something close to his heart when he retired. He takes care of Espy the goat, who came to the sanctuary without the benefit of hooves on her back legs, unable to walk. Tracy Vogt could have simply nurtured Espy with food and housing, but she went the extra mile and had her fitted for prosthetics. Al attaches the prosthetics, provides gentle physical therapy, and takes Espy for a slow morning walk around her large outdoor pasture. He is happy to sit with her at rest times, while her friend and self-appointed guard Hombre the turkey patrols protectively, one step removed, but still vigilant.

The sanctuary frequently opens its space to other rescue centers who face evacuation from floods or fires. Marybeth and Glenn Hall of When Pigs Fly Ranch in Guerneville were evacuated twice; the last time from the Walbridge fire zone in 2020, when Charlie’s Acres provided safe haven for them and 27 of their animals.

The Becks lived in a trailer at the farm for a few weeks and joined in with the care of all the animals, including their own. They are immensely grateful to the sanctuary, and now routinely drive the 100-mile round trip regularly to perform volunteer duties.

A hospitality/education center will open to the public early this Fall. Sign up on their website for alerts to all proposed events as they are scheduled. Meanwhile, programs and tours are available by reservation, with Covid-19 precautions. Mingle hands-on with friendly animals, hear their stories, and enjoy a day in glorious Sonoma sunshine. Charliesacres.org