As always there’s both good news and bad news to the story. In the world of weed, the good news is that this year small farmers have harvested some of their best crop ever in terms of quality. The bad news is that they’re on the ropes and taking an awful beating. Jason Gellman, an Emerald Triangle farmer, tells it like it is. In the 2022 Cannabis Harvest Report from Leafy, the most reliable source in the industry, Gellman says, “Prices this year are at an all time low and honestly pretty tragic for all the craft farmers. Lots of people will not be able to afford to keep their farms going. Our community as a whole is in a bad financial place.”

Notice please that he uses the word “honestly.” He doesn’t just give honesty lip service, though it’s challenging to speak honestly in an industry that’s like many others in which hardworking, dedicated individuals want to put a smile on their own faces and offer good news to a public that’s eager for positive, hopeful stories.

In 2022 in the world of cannabis those stories are hard to come by, though more Americans than ever before believe that cannabis ought to be legalized by the federal government and that cannabis can be good medicine.

I have been writing about cannabis for 46 years, going all the way back to the late 1970s. I also grew marijuana and sold marijuana and transported marijuana. Some of my closest friends grow and sell marijuana now, both legally and illegally. The outlaw growers in California are doing better financially than legal growers like Jason Gellman. 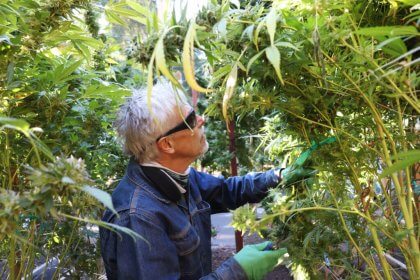 Mike Benziger told me the other day that 2022 was “one of his very best vintages.” He has been growing and harvesting marijuana for 45 years. Before 2015, he was in his own words, “under the table.” Before he turned to cannabis as a cash crop he grew grapes biodynamically and made excellent wine. The story that he tells about marijuana is the same in its essentials as the story that Gellman tells, though they’re separated by hundreds of miles and by climate geography and topography, which have often worked for the benefit of growers since the 1960s.

“In 2022 there’s an oversupply,” Benziger told me. “Prices took a tumble. Not long ago farmers were able to get $2000 a pound. Now, they’re lucky if they get $300 a pound.” He added, “Some will have good pot but no one will buy it. There aren’t enough outlets. We need more dispensaries.” Benziger is able to survive in part because Solful, a popular dispensary in the well-healed town of Sebastopol, buys a big chunk of his crop at a price that’s decent and that “keeps the lights on.” If you have read so far and you still want to get into the cannabiz, Benziger has advice for you. “Don’t have a mortgage or overhead,” he says. “Love what you do and have experience.”

Early in November, Benziger played host at his farm in Glen Ellen to a small group of farmers and reporters who cover cannabis. There were more reporters than there were farmers. Cannabis continues to be a hot topic and a compelling story. Editors and readers want to know which way the wind will blow: toward more legalization and normalization of the industry; the removal of cannabis from Schedule I as a drug with no known medical benefits; and the end of the nearly 80 years of the federal cannabis prohibition. Time will tell.

At Benziger’s farm, the growers, who came from Humboldt, Mendocino and Sonoma, talked about their best practices, their collaboration with the plant itself, their small is beautiful philosophy, and their commitment to “craft cannabis” or what others might call “boutique weed.”

According to Leafy, and to David Downs, Leaf’s star reporter and savvy editor who attended Benziger’s confab, more growers in more states in the U.S, grew more marijuana in 2022 than ever before. A glut on the market, and bottlenecks, too. Many of the new growers are far closer to big city markets in LA, NY, Chicago and elsewhere than the growers in the Emerald Triangle. Once, remoteness from law enforcement helped them; now it’s a hindrance.

One of the growers at Benziger’s remembered the days when he and others had to deal with helicopters and cops; now they have to deal with bureaucrats and bureaucracy. Take your pick. One could sometimes negotiate with a cop; now there’s no wiggle room to negotiate with a man or a woman behind a desk with a computer that knows the rules and regulations and doesn’t understand negotiation. The Emerald Triangle, where I once grew, was the Wild West; now it’s Kafka territory and can be crazy making. I’m glad I got out when I did.  I’m not going back. But I sure would like to smoke some of Benziger’s 2022 buds. I’m not looking for a freebee. I’ll pay the market price.

Jonah Raskin is the author of Marijuanaland: Dispatches from an American War