Rewarding the ‘drive to succeed’ 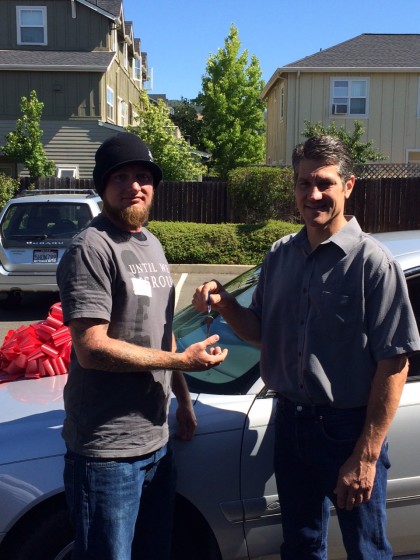 Mark Garrett, recipient of the sixth annual Wheels to Prosper car giveaway, takes the keys to his gleaming reconditioned car from Dino DiGuilio. The owner of Body Best, DiGuilio started the giveaway program as a way to “put good people in good cars so they can do more good in the community.”

Garrett, a married father of one, was chosen from nominations of local people contributing to the community. As a member of the Army serving in Iraq, Garrett, according to a captain with whom he served for two years, “demonstrated nothing but the best example of character, desire to excel, unwavering dependability, and courage under unimaginable stress.”

Garrett works at Innerstave in Sonoma, where company President Alicia McBride appreciates his “let’s get it done” attitude. “His commitment and drive are rarely seen in individuals of his age these days,” she said. “He looks for a way every day to improve himself, and to provide a life of normalcy for himself, wife (Misty) and son (Tyler).”

The car giveaway program, which includes partnerships with Pacific Rim Auto Repair and North Bay Insurance, will continue with another vehicle giveaway next July.